In June 1992 Acorn launched their only portable computer. Reportedly based on the A5000 (or may be vice versa) the A4 has the footprint of a sheet of A4 paper (hence the name) and weighs about 3 kg. The A4 came with a rather fetching carry case with space for the external power supply, manuals and a mouse. The A4 has an ARM3 CPU clocked at 24MHz, 4MB RAM and a 640x480 16 greyscale screen.

The reason that no one else has made a RISCOS laptop, since Acorn made the A4, is reported to be the problem of the case. While it may be easy to find a suitable case, manufacturers tend to have a production run for a single model and a new case for the next model. With a such a short lifecycle, often less than 1 year, by the time a RISC OS manufacture had decided on the case, designed the hardware to fit it and was ready for the production, the case was no longer available. The only solution to this problem is to have lots of mony and buy enough cases for 3-5 years (the typical RISC OS lifecycle). Apart from Acorn when it was part of Olivetti and could use a Triumph Adler case, no one else has solved the problem or had the money.

A4 models included [that I know of]:

Here are the Acorn press releases:

Here is the Acorn A4 product brochure:

Here is the Acorn A4 Technical Reference Manual and technical drawings .

I never owned an A4 for my own use and bought this A4 privately in 2004. While cataloging and photographing the A4 for Chris's Acorns, I added an Econet module which I had bought seperately. Theo Markettos has instructions on dismantling and reassembling an A4 on his web site

Here are some photgraphs. 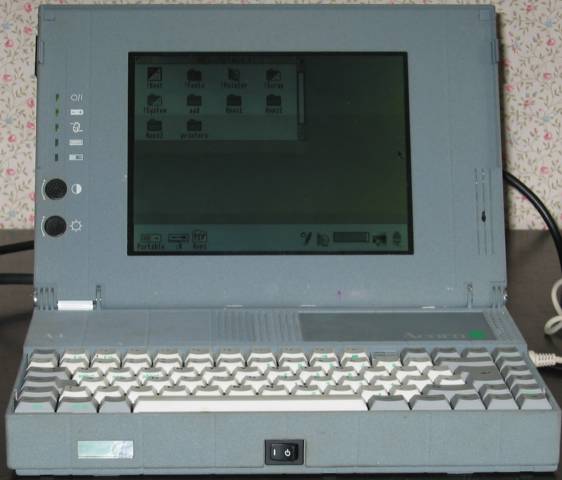 The A4, Acorn's only laptop, running RISC OS 3.10 which you can just about see on the screen. The screen brightness and contrast dials are on the left of the sceen below the LED lights for ON, Battery status, charging, floppy disc and hard disc activity. On the right hand side is the speaker (not visible) . Just visible on the right bottom is the lead for the mouse.

The front of the A4 with the lid closed. In the center is the on/off switch and to the left is the LCD battery status guage which goes from 0-100, unfortunately it doesn't seem to work very well when the battery no longer holds its charge. On the top of the case is the Acorn Logo and the LED status lights on the left hand side, they are: ON, Battery status, external power, floppy disc and hard disc acttivity.

The left side of the A4, showing the black lid release catch on the right, with the battery pack below at the bottom. On the left is the cover for access to the motherboard , which will be replaced by the A4 Econet module. On the top you can also see the status LEDs and the Acorn logo.

The back of the A4 with the flap that protects the ports open. From left to right, the ports are parallel, DC Power and VGA Monitor. The serial number is on the right hand side, this A4 is an AKB64 with a 60 MB hard disc. 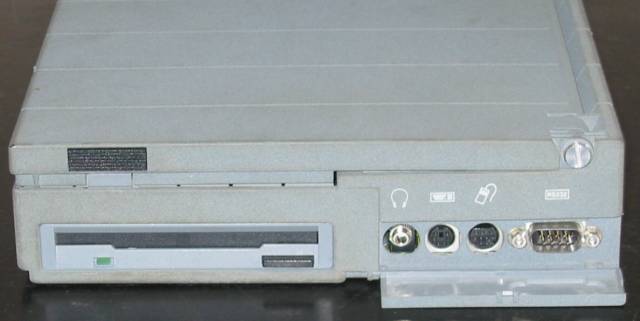 The right side of the A4 with the floppy disc drive on the left and the ports, with the protective flap down, on the right. The ports are headphones, keyboard, mouse, RS232. 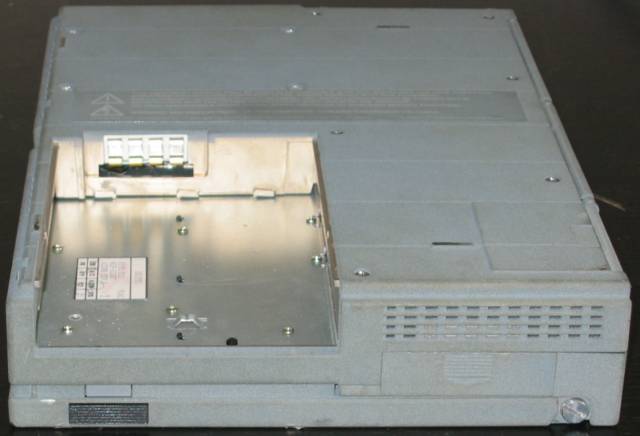 A4 bottom, without battery

The A4's bottom with safety notices above the gap where the battery fits. 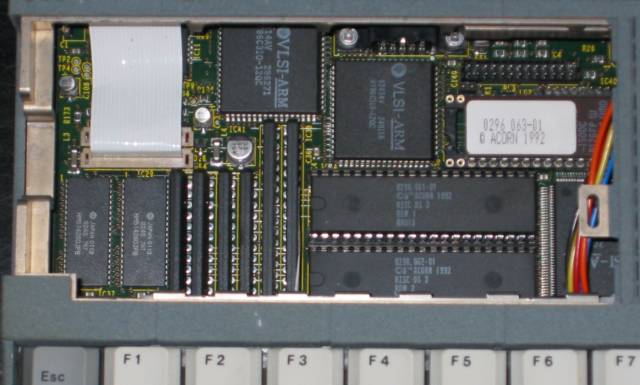 This shows part of the A4 motherboard which is visible when the cover (or Econet module) is removed. The white ribbon cable on the left connects to the screen, these are fairly fragile and I had to replace them to get the screen working. On the right hand are the 2 RISC OS 3.10 ROMs and above them is an extension ROM with the power management module. As you can see it is very crowded and replacing the ribbon cables was not easy for someone with large fingers like me! 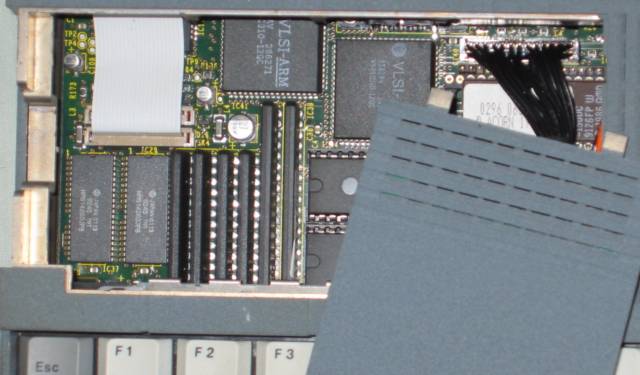 This shows the Econet module connected by the black cable at the top right. 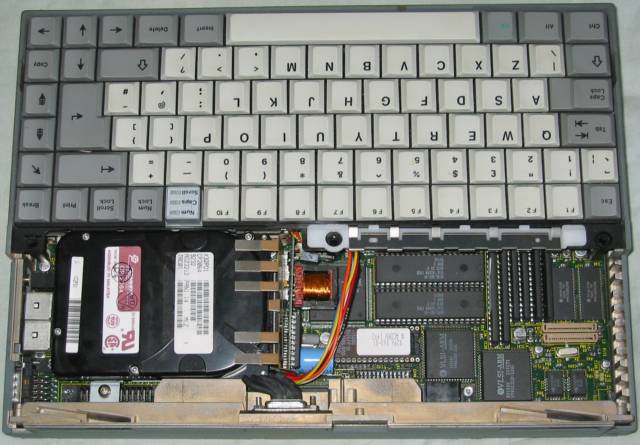 A4 with screen removed

Here the A4 screen has been removed showing half the mother board and the hard disc. The 2 big ROMs on the right below the keyboard are the RISC OS 3.10 ROMs, the ROM with the white label is the extension ROM with the power management software. The two brown sockets in the bottom right are the clips for the ribbon cables from the screen. 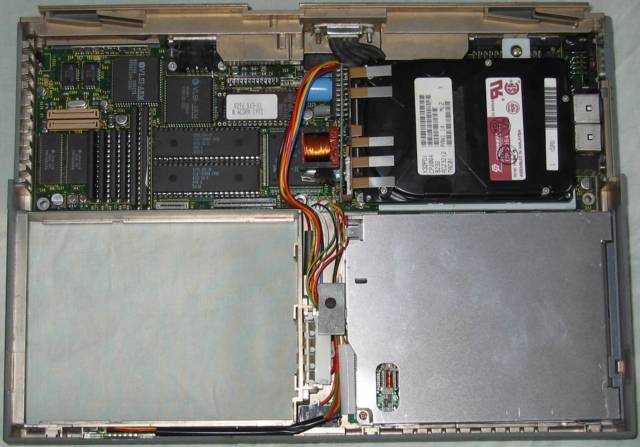 A4 its keyboard removed 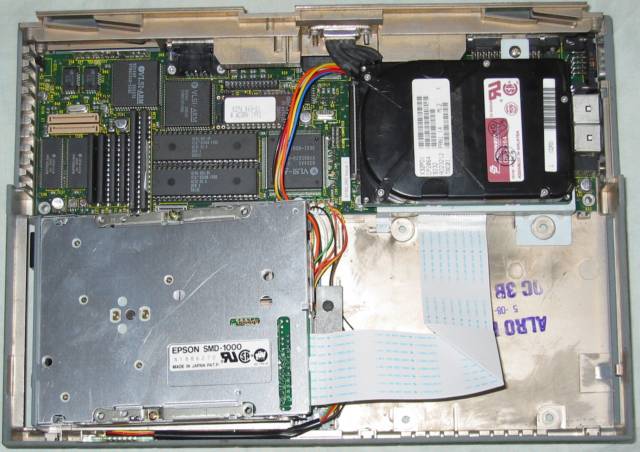 A4 with floppy drive ready to remove 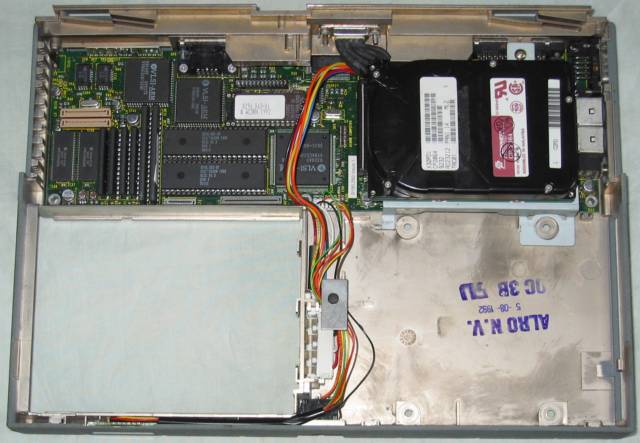 A4 with floppy drive removed

A4 with floppy drive removed. 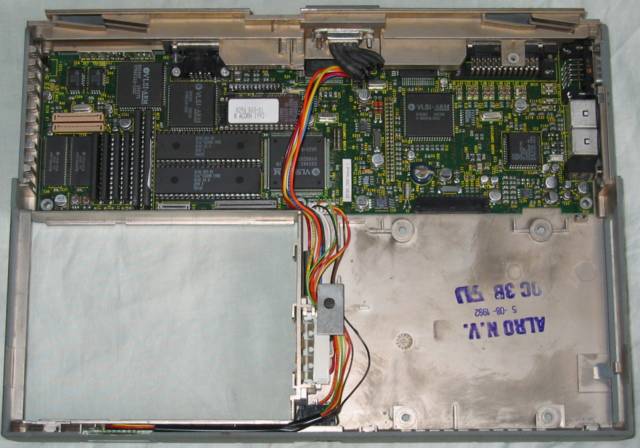 A4 with hard disc removed

A4 with hard disc removed. The A4 motherboard in the top of the case. I have not removed it from the case as there are lots of nuts and bolts to remove. As you can see it occupies less than half the case and is reported to have components on both sides. The floppy drive connector is the black connector in the bottom right of the motherboard. 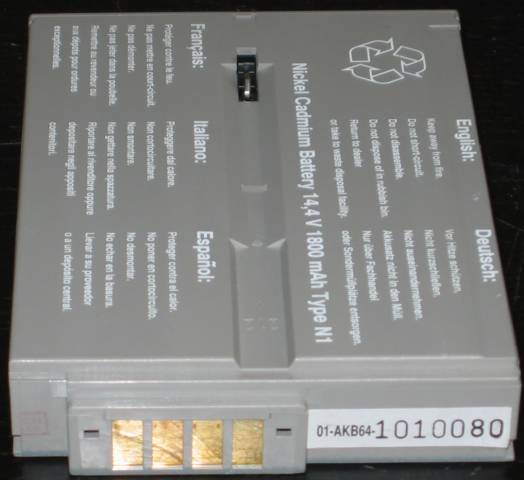 A4 battery pack, as usual this one is completely dead. It is possible to open it and install new batteries but I have not done so yet. 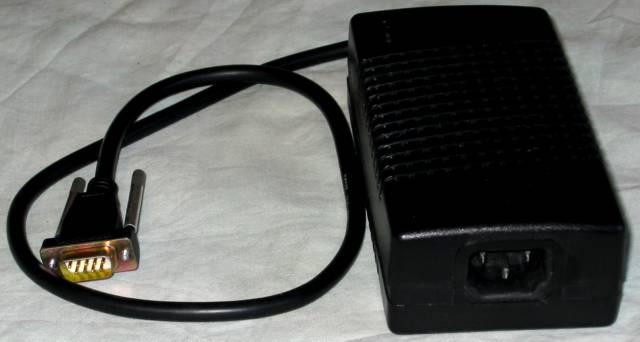 A4 mains power supply. The connector plugs into the back of the A4 and both provides a 5V DC supply to run the A$ and recharge the A4 battery. 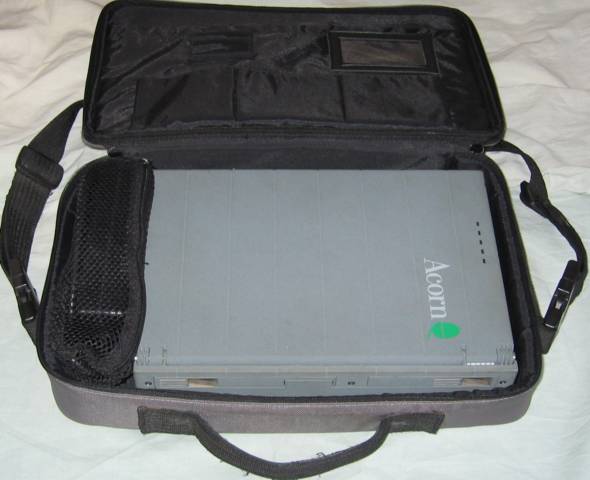 A4 in carry case

A4 in its carry case. The power supply is in the net at the left. There are pockets in the lid for floppy discs. 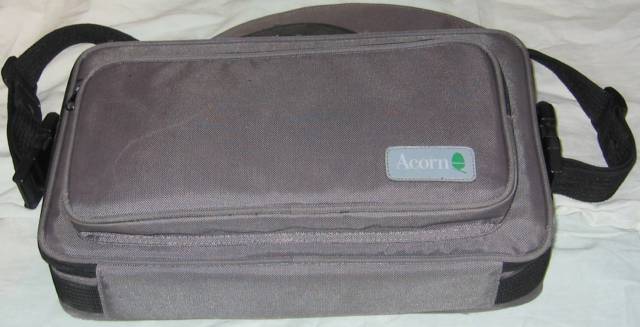 A4 carry case.  The pocket on the front it for the manuals ( and mouse).