My first computer was an Issue 3 BBC B, bought in Cardiff from Cardiff Micro Supplies (46 Charles Street, Cardiff) now long defunct. I remember playing the early Aconsoft cassette games, in particular Philospher's Quest and Snapper, and the anticipation waiting for each new one. Originally my BBC had OS 0.1 which I upgraded to OS 1.20 as soon as it was available, but I still have the old OS 0.1 ROM. I also have the original box and polys but after several house moves they are not in pristine condition.

I was working on ICL mainframes at the time, so found lack of disc drives frustrating (waiting for the cassettes to load). So when the Torch Z80 Disk Pack was launched, I bought one. I found the old invoice  for it, it cost me £894.61 (including the DFS upgrade and some discs).

The other benefit was CPN (Torch's version of CP/M), because I was also using CP/M micros at work and most of the software was easy enough to port to CPN. I still have the Torch Z80, most of the Torch manuals and a lot of CPN software although whether it all works is a different question.

As I became more familiar with the BBC, I started programming in BASIC and then Assembler. I managed to sell some of the software but most was for my own use. The 32K memory on the BBC B was a significant limitation so I bought a 6502 second processor and got HiBASIC, HiView and HiWordwise to use with it. I also bought lots of ROMs  over time. Only having 4 ROM sockets was limiting and I lost a few legs changing ROMs, so I bought an ATPL Sideways ROM board and then the Viglen Sideways ROM cartridge system  which used the BBC "ashtray" for its socket.

When ADFS was lauched I thought it much better than DFS and more flexible, but almost all disc based software expected DFS and wouldn't run of ADFS. All the same my BBC acquired a daughter board with a WD1770 disc controller and an external switch to switch between Torch MCP and 1700 DFS. Along the way the BBC got too hot so I removed the power supply and ran it from the Torch Disk Pack power supply.

When Micronet 800 on Prestel was launched, I signed up and got my acoustic modem and ROM, over time I upgraded to a WS2000 and then a US Robotics Sportster.

When last used it was working, but I haven't tried it recently except to get these photographs. It was, originally, an ANB01 model. 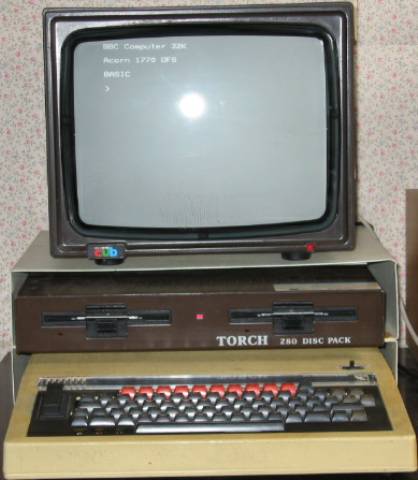 The "BBC Computer 32K" says that this is a Model B. The "Acorn 1770 DFS" shows that the WD1770 disc controller is fitted and DFS is the default filing system. The switch above the BBC Owl, switches between BBC mode and Torch MCP. The case is very yellowed, but whether this is from nicotene, because I used to smoke a lot in those days, or whether it is the plastic aging from sun light, I don't know. I haven't tried cleaning it yet. 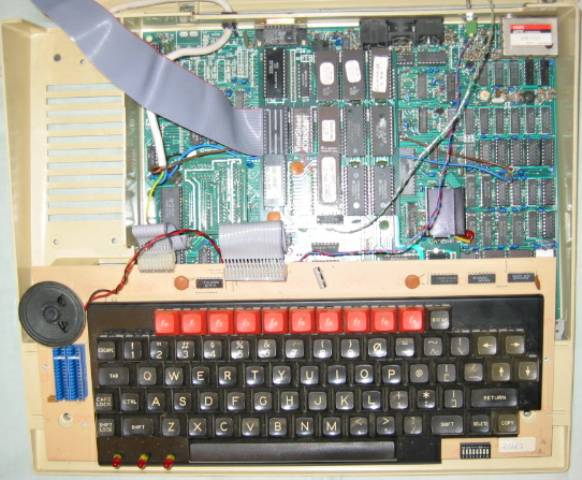 BBC Issue 3 with the top off

Note the early keyboard with DIP switches at bottom right and cartridge sockets on the left hand side. The heat sink is visible on the ULA in right middle. The ATPL Sidewise ROM card is in the middle and the ribbon cable leads to a Viglen cartridge socket. Also the power supply is missing! 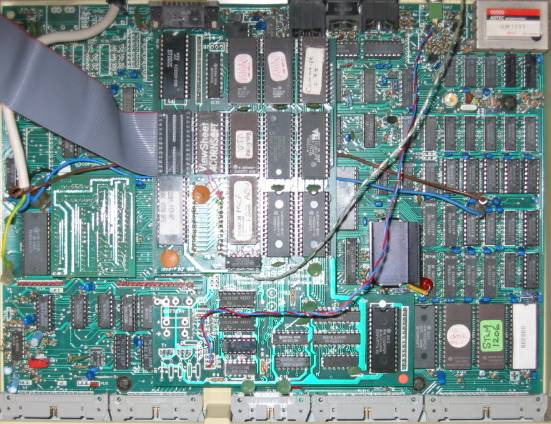 Although you can't see much of it! In the middle is an ATPL Sidewise ROM RAM expansion board, the red/blue wire going to the back (by the TV modulator) leads to a switch, where the composite video output was, to control write protection for the RAM.

The ribbon cable going to the left connects the Viglen cartridge socket in the "ashtray" to one of the ATPL Sidewise ROM sockets.

Just below the Ribbon cable is the daughterboard for the 1770 upgrade and to its left is one of the ICs for the Speech system, the other is underneath the 1770 board.

On top of the Sidewise board is another daughterboard with the 1770 DFS ROM and the Torch MCP ROM and the green/white wire goes to the BBC/Torch switch in the top of the case. 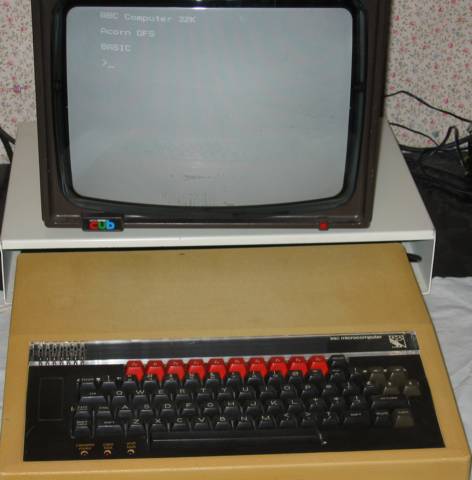 The BBC Model B Issue 3 is running OS1.20, BASIC II and DFS 0.90. It is a standard ANB03 model. The case is very yellowed with age. Note the "BBC microcomputer" on the keystrip holder.

The picture shows the wide ventiation slot on the Issue 3, which is narrower and partially blocked to stop little fingers getting in. The standard ports are present (UHF out, Video out, RGB, RS423, Cassette and Analogue In). The reset switch cutout, which is present in the Issue 2, is no longer marked. Econet is not installed. 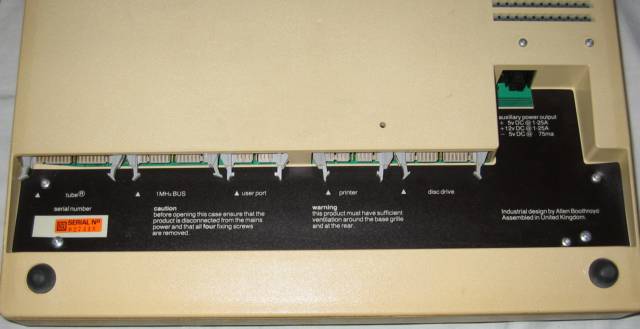 The bottom of the BBC Model B Issue 3 showing the ports, from left to right ( Tube, 1MHz Bus, user, printer and disc drive). The ICL serial no ( 027418) is on the left. The auxillary power outlet for a disc drive is on the right. 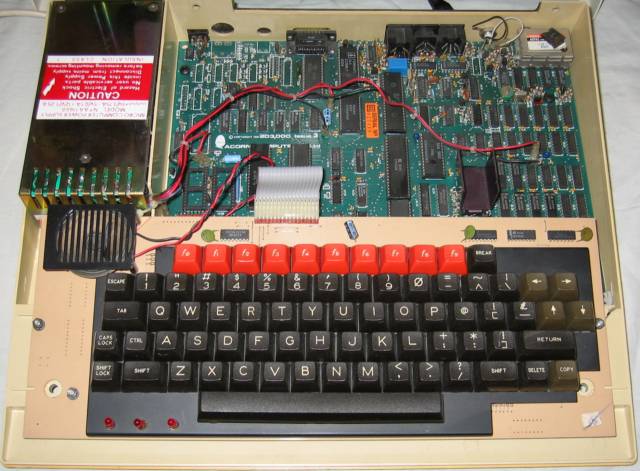 The BBC Model B Issue 3 with the top cover removed showing the keyboard, power supply on left and motherboard. 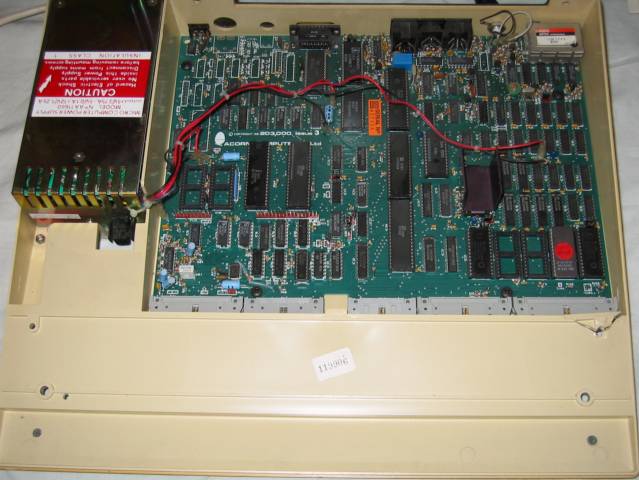 The sideways ROM sockets on the Bottom right of the motherboard are only accessible when the keyboard is removed. 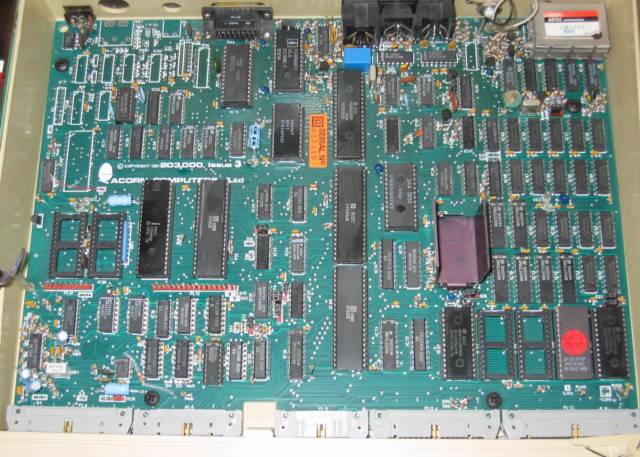 Here is a Hi-Res picture of the BBC Model B Issue 3 motherboard.

Note that unlike the p[revious Issue 3 it has a screen over the speaker, but does not have the cartridge sockets on the left or the Boot option DIP switch on the bottom right and second ribbon cable to the left of the main one.