The FastNC or Office NC (see photographs below) is also, reportedly, the CoNCord, although it is in a NetStation case and doesn't look like it would fit in any of the wing designs for the CoNCord.

A correction from Piers Wombwell "It does fit! Measure the gap between the LEDs and smartcard slot in the photos, and it'll match with any NC. The same with the (vertical on an NC, horizontal on the coNCord) alignment of the slot and the LEDs - slightly off centre. They were design mock-ups and never produced. The Acorn logo was stuck on with blue-tac. I think it was actually one of the enamelled lapel badges". Piers should know as he had the NC from Acorn (see below).

The FastNC is very similar to a RiscPC with a 200MHz Digital StrongARM CPU, IOMD21 and VIDC20. It has RiscOS 3.71 on a card which is a bit like a PMCIA card and fits (badly, the flap doesn't close properly) into the smartcard slot at the front of the case. The FastNC has an Acorn 10baseT Ethernet podule.

I bought the FastNC from Piers Wombwell on ebay in October 2005. Here is his description from the ebay auction:

This was the first Fast NC (as we called them), or Office NC as Oracle/NCI called them. I was working on porting Java to RISC OS, and needed to do demos. Java demos needed a rather more powerful processor than a standard NC could provide, so I was given the first StrongARM NC off the production line.

There were a couple of earlier prototypes (with serial numbers A, B...), but they were unreliable, so I returned mine :-) I doubt they exist anymore.

This is essentially a RiscPC squeezed into an Acorn NC box. It boots to a RISC OS 3.7 desktop. It runs all StrongARM compatible software that I ever tried (admittedly I haven't tried all that much).

Note: This needs a network to boot. It needs a server serving IP addresses using BOOTP. I can give instructions of how to set this up on FreeBSD (absolutely trivial). It does not need any software sent over the network, though obviously it's not all that much use without software, and there's no hard disc or floppy interface. The ROM includes !Alarm, !Chars, !Draw, !Edit, !Help, !Paint and !Printers. The ROM also includes NFS.

The FastNC has an Acorn 10baseT Ethernet podule . 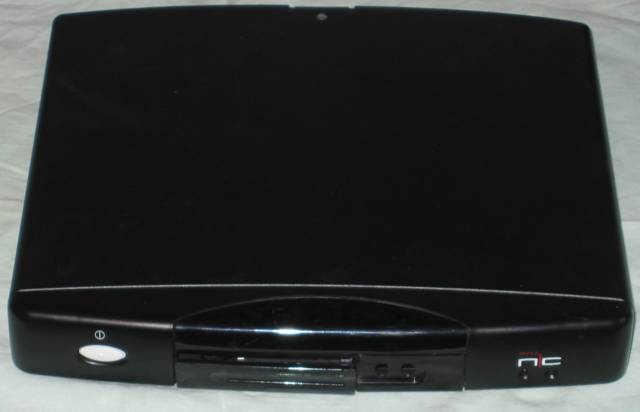 The FastNC case is similar (the same?) as the NetStation case. 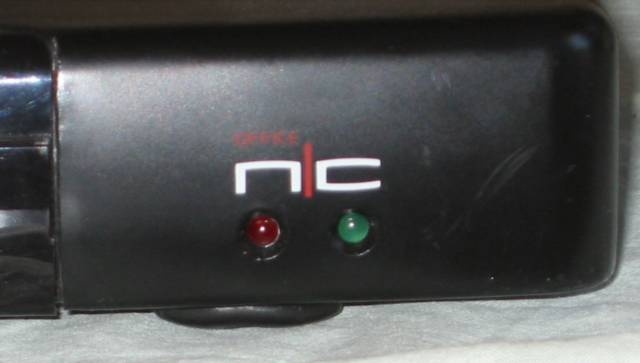 Boring shot, but shows that the case is the same as the Netstation!

Back view of the FastNC showing the standard ports, from left to right: 10BaseT Ethernet Adaptor, parallel port, keyboard, mouse, audio, monitor and psu. You can also just see the security point on the top of the case which can be used to lockdown the NC to a desk or whatever. Note also the FastNC label on the Ethernet podule. 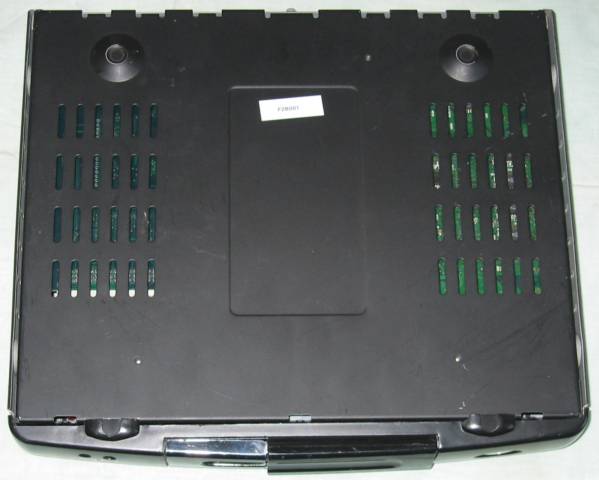 Bottom view of the FastNC, with the serial number F2B001. 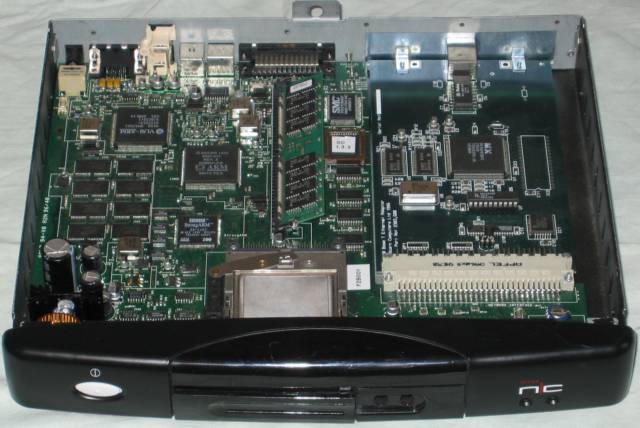 FastNC with the cover off

FastNC from the front with the top cover removed. On the right is the Acorn 10BaseT Ethernet Adaptor, in the centre the 16MB SIMM, below the SIMM is the smartcard adaptor, on the front left is the power supply and power on/off button (not working), above the psu on the left hand side is 2MB VRAM surface mounted on the motherboard, to the left of the VRAM is the Digital SA110J CPU and along the back are the ports.

Here is a HiRes picture of the Acorn FastNC with the cover off . 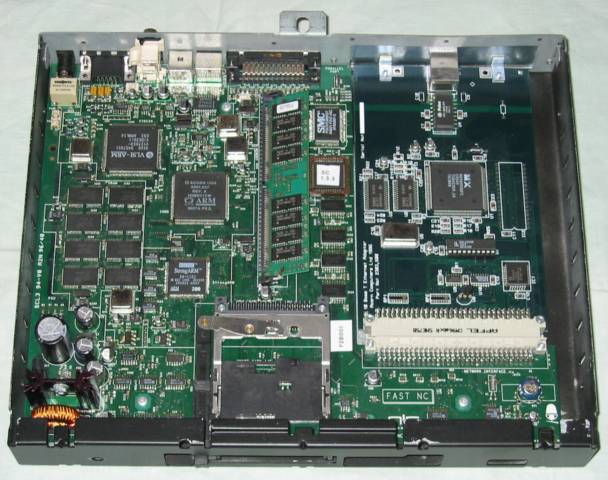 Here is a HiRes picture of the Acorn FastNC with the facia removed . 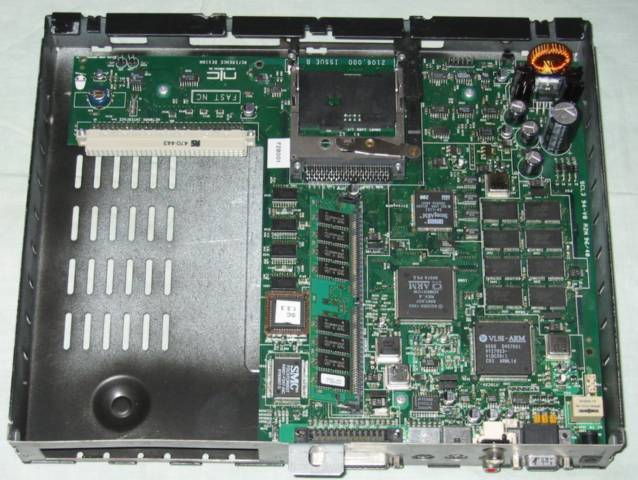 Ethernet Adaptor removed from FastNC, as is the smatcard. A view from the back showing the NCI logo.

Here is a HiRes picture of the Acorn FastNC without the Ethernet Adaptor . 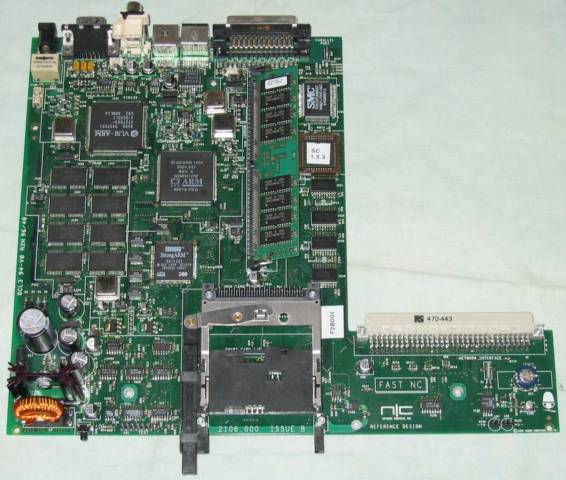 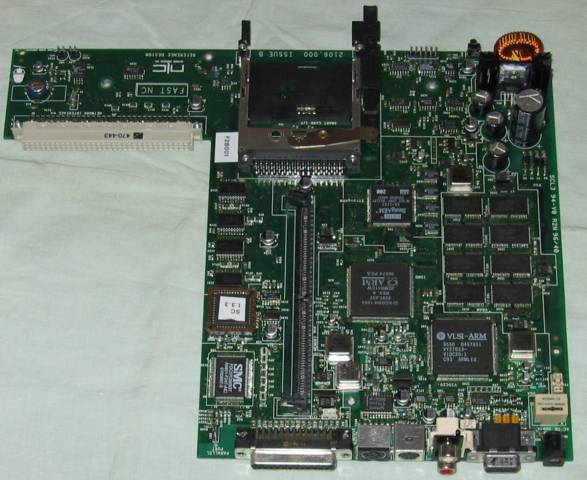 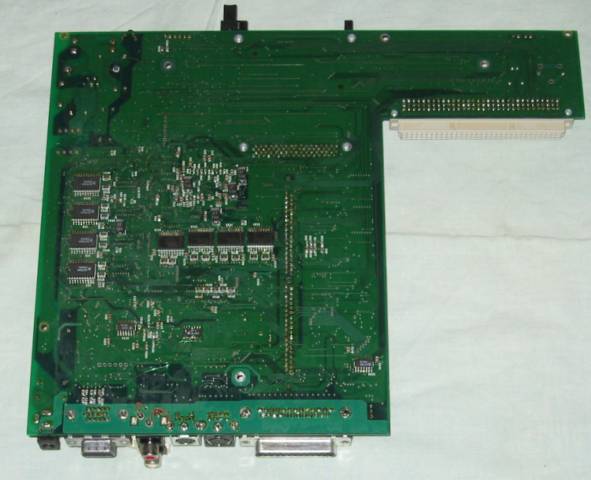 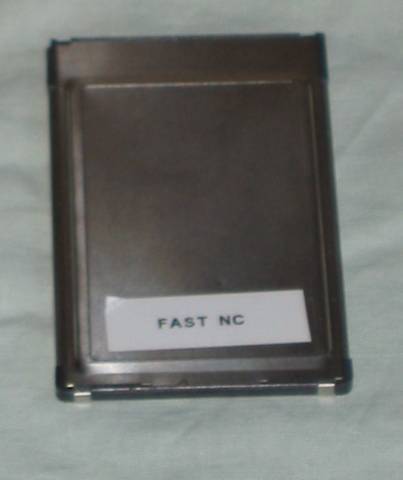 This is the FastNC smartcard. Actually is is not a smartcard, it is mor a PMCIA type card and holds RISC OS 3.71.