I don't know much about this machine, and can't find much on the internet by googling for it. I bought this example on ebay in June 2004. I have subsequently received emails from two people who used to work on the Reuters system with descriptions of the systems and how they were developed, they are Duncan Booth  and Scott Earle , I have included the, slightly edited, emails below.

The Reuters APM Board has been described as a BBC B+ on a Eurocard. Because of the name, I assume that it was made for Reuters by Acorn. The connector panel says "Application Processor Module" and is clearly desing for vertical mounting in a rack (see photo). The Reuters APM board is designed with levers on the back end to help remove it from a rack and what appear to be solder contact pads for power (+5v and 0v) supply as there is no obvious power connection. There is no Disc Interface, but there is an Econet port on the connector panel, jumpers on the APM board to set the Econet address and a ROM label NFS 3.65. There are 3 ROMs on the APM board labelled: 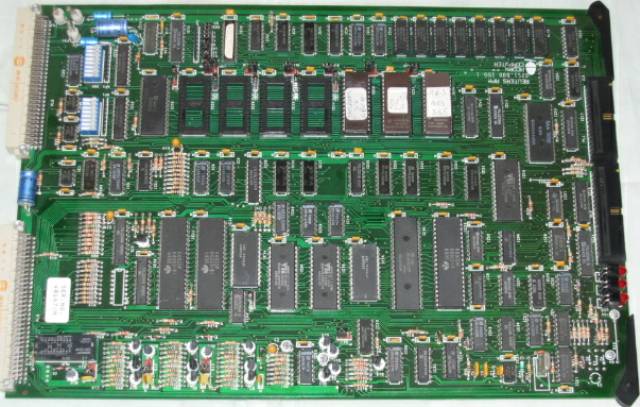 Reuters Application Processor Module, the Connector Panel connects on the left, the power connects to the 2 solder pads on the bottom right. The ROMs have white labels and are in the middle.

I worked for Torch computers for a while in 1982, and 1983-4, after which I moved to a company called RCP in South Oxfordshire. RCP had been responsible for the BBC micro BCPL implementation sold by Acornsoft, but they also did software development for Reuters and a lot of this was written in BCPL and ran on the BBC micro. The BBC micro wasn't really suitable for installing in the sort of trading room environment where it would be used, so Reuters got Acorn to design the APM.

A typical dealing room environment at the time would have the dealer sitting in front of two or three screens connected to several computers over long cables: I remember a debugging session at the Natwest tower before it opened with screens and keyboards on floor 24 and APMs on floor 3. They hadn't installed the telephones, so we used walkie-talkies to ask for a reboot when we managed to crash a system, and it was a long walk between the two as there weren't any working lifts stopping nearer than the 27th floor. The Reuter keyboards had dedicated keys to switch between the available applications, and each application was probably on a completely different system. That's why the back panel has video in and out, and also in and out for the serial keyboard: you could take an existing setup and simply wire the video and keyboard cables through the APM. It would respond to the hotkeys to become active or route everything through. If I remember correctly (and I'm not entirely sure on this point, the racks had the power supply at one end, and a backplane (possibly Eurobus?) going all the way across supplying power to up to 12 APMs. I'm afraid I can't remember if the backplane did much more than power: I know we designed another Eurocard which could sit alongside the APM with 1Mb of battery backed RAM, but I'm not sure how it was connected.

The main data source for applications was Reuters Monitor which provided a feed of 64x16 upper case only pages (see http://about.reuters.com/aboutus/history/technology.asp : click on the picture and you can get to a hires version to see the weird keyboard clearly: the screens may have improved by the mid 80s but the keyboards were much the same). Human readable pages included top news stories and trading rates, but we also added packed data pages with historical rates. APM applications I can remember include Reuter Graphics (an array of monitors including several graphics displays featured for a time on the BBC's Money Programme as the link video they used between stories), News used the CMOS ram card to store masses of stories (up to 1Mb :) ) which the APM could then search; Abacus was a program for doing arbitrage calculations.

There was also an application written (I think) by Reuters themselves which took a feed called TOPIC supplied by the stock exchange into an IBM PC and multiplexed it out to 12 APMs connected to the PC by Econet. I did some of the network drivers for this which is why I remember it: in particular testing at Fleet Street when something (maybe printing presses starting elsewhere in the building) managed to blow out the Econet chips for all 13 network interfaces simultaneously. It took us quite a while (and we had to build a completely separate econet) before we release that it wasn't a single fault or even two or three. Acorn apparently admitted that there was a theoretical(!) possibility that a difference in earth voltage between the endpoints of the network could do this.

We also started work on a replacement for Reuters Dealing which was planned to run on APMs with a PC server, but by that time it was becoming obvious that the future lay in PCs, so we quickly switched to developing on Microsoft Windows (version 1.04) instead and when Dealing 2000 (as it became known) was released came out it ran on PCs and Ethernet. The APM-1 was followed by the APM-2, but that was a PC on a card and no relation to Acorn at all.

I was reading stuff about BBC Micros, and found your page about Acorns. Being a huge BBC Micro fan I had quite an interest in them in the 1980s, and I applied for a job with a company called RCP in 1987 which did some work for Reuters. Some of it was on IBM PC/AT (and XT/286) machines, and some of it was on BBC micros and APMs.

I went to an interview with RCP, and was employed by them, initially working on BBCs doing work for Reuters that would actually run on APMs, displaying teletext-style (mode 7) pages derived from Reuters' page-based news system called Reuters Monitor. We used to refer to the APM as a "BBC Micro on a card" if anyone asked what it was.

The language of choice for the software we produced for the APM was BCPL, which you may recall from the dim and distant past as being a precursor to C. BCPL was the brainchild of Dr Martin Richards at Cambridge University in the 1960s, and RCP (Richards Computer Products) was started by his brother John Richards in 1980. Interestingly, RCP produced the BCPL implementation for the BBC Micro. They also produced an implementation of Logo, although from memory this did suck a little.

The whole development environment was based on an Econet network of APMs and BBC Micros in John's garage, in the mid-late 1980s. Some of us used BBC Master computers, while others used BBC Bs or even cross-compiled from an IBM PC/AT with an Econet network card. I used to have a test rig that had three BBCs wired together with serial cables.

Anyway, going back to the APM, it was a very nice environment to develop for at the time, although everything was developed remotely and had to be copied to it using the Econet fileserver. The Econet itself was semi-reliable, to be honest, although it was good enough for doing file copies.

The APM also had a few LEDs at the front, I believe (six of them?). We used to have a cage with a half-dozen or so of these cards in, and properly mounted in a rack they looked quite smart. We did several programs for Reuters on the APM, some of which were actually very good. However, given the semi-proprietary nature of the platform it was all Reuters software, and without the original datafeeds (now discontinued - Reuters Monitor became end-of-life in 1999) it doesn't do very much.

The BBC implementation of BCPL used to compile down to an intermediate code (called CINTCODE) that was run on a virtual machine, in a similar fashion to how this new-fangled upstart Java works. We would compile our BCPL code on a BBC Master (or cross compile on a PC/AT) and build an EPROM image of the CINTCODE interpreter plus our compiled code which was then copied to the fileserver. This was then loaded into static 'sideways' RAM on the APM, which would reboot and run the code.

Products which used to be available for the APM were:

Reuters Graphics: this was a tool that would take historical trading data from the Monitor feed, and display it graphically. Remember that this was about 1985-1988, and such things simply didn't exist then. It would display low/high/close prices and allow trends and moving averages to be calculated/displayed.

Reuters Abacus: this was an FX arbitrage package - in 'normal speak' this would look at the current prices of all the foreign exchange (FX) currencies at the moment, and work out the tiny differences in prices between different currency pairs. For example, if your customer had 1 million GBP and wanted to convert it to USD, you would do the conversion for him, but via the DEM, SAR and JPY - you could walk away with an extra 500 USD on top of the commission that you charged him. Do that often enough and it could turn into a nice little earner.

Reuters News Watch: I worked on this one. It would take a Monitor feed, and show pages of news in a fashion similar to how Ceefax used to do it on page 198. A group of say 20 pages, with general news, business, financial and sport. This was sold to hotels and big businesses to put in their lobbies.

I believe that RCP still has some APMs and the rack we used to use, and may still have the fileserver and Econet. I am still in occasional contact with them, and worked with them until 2004.

They used to have some interesting BBC-related kit, including 6502 second-processor serial number 3. One thing you may have noticed when I was prattling on about compiling stuff was that they had (and still have, unless they binned a load of stuff recently) some Econet cards for the IBM PC, which would allow a PC to read/write files across the Econet.

But without the Reuters datafeeds, the software itself is not much use. I do believe that we had simulators though, because I used to do most of my development of News Watch pages up the road in the then-'new' building, and leased lines (even 300 baud ones!) were hellishly expensive then.