I bought this computer in May 2005 on ebay from Uniqueway Ltd. Paul Middleton described it in the auction as:

"This auction is for a very rare Acorn Computers - Risc PC prototype.
It is clearly marked on the lid and on the Serial Number sticker as being a prototype.
It is virtually identical to a production machine apart from a few small points.

I have no documents specific to this prototype. See Risc PC Computers  for other Risc PC documents.

I have also installed the Acorn "Duet" ARM610 2nd processor  which was used to debug the second processor connector but not sold as a commercial product.

I have added a Fujitsu 200MB Hard Disc, because the original hard disc had been removed, and a TEAC CDROM, because a CDROM (or was it a 5¼" floppy/hard disc?) had been fitted at some time and later been removed. I am not sure I actually tested to CDROM as I don't think that RISC OS 3.50 supports them. I also added 24MB RAM, 1x8K and 1x16K SIMMs, as there there was no memory included.

This is the front of the Risc PC showing the floppy disc drive which does not match the Risc PC case. It is a Citizen model used in the A5000 and looks as if it would match the A5000 colour scheme. 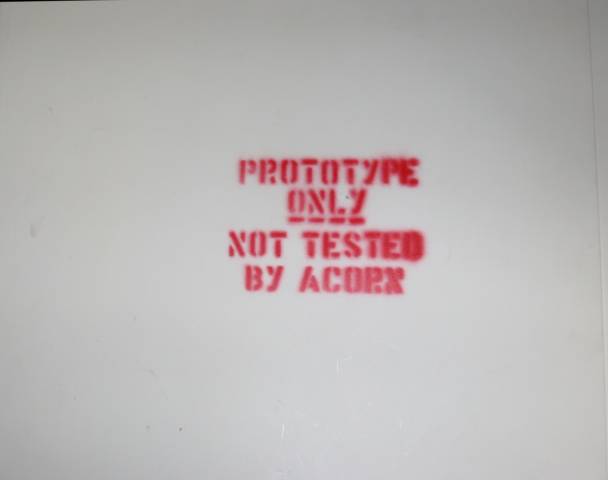 What makes me think that this is a pre-production, prototype, Risc PC? Well this is one of the reasons, it is painted on the top (lid) of the Risc PC. Can't get much clearer! Although I suppose it could be a hoax...

The back of the Risc PC, the podule blanking plates are missing, as is the blanking plate for the network interface. There is further evidence of the Prototype staus with the "PROTOTYPE" serial number and the missing barcode. 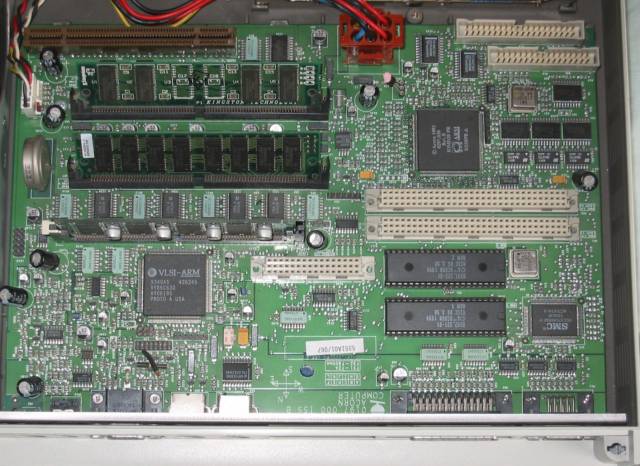 In the middle at the bottom of the motherboard, the part number (0197,000 Iss B) is just visible. On the right hand side from the bottom are the 2 RISC OS 3.50 ROMs, the CPU connectors are next with the IOMD20 above them. The IDE connectors are visible in the top right. At bottom on the left is the VIDC20 with the VRAM immediately above. The CMOS RAM Battery is the middle on the left edge with the 2 RAM SIMMs next to it.

This is the VRAM module that Paul Middleton referred to in his description. It is very difficult to remove (or insert) the module from the motherboard.