John Kortink's description of the GoMMC  on his website is:

GoMMC is the ultimate storage system for the Acorn BBC and Electron. It allows a single MMC (MultiMedia Card) to replace all your floppy drives, floppy discs and hard discs. GoMMC acts like a huge jukebox, containing hundreds or even thousands of individual (floppy- or hard-) discs, which can be selected by name with one simple *-command, and then used just like before (through slightly changed versions of standard filing systems).

Total Storage. Everything you ever had, right there at your fingertips. No more searching. Switch discs in seconds.

Giga huge. Stores anything up to 4 GB worth of floppies and harddiscs (depending on the capacity of the MMC).

Very fast. Over 100 KB per second typical transfer speed, i.e. games and the like load in a jiffy (half a jiffy, really).

Compatible. Works as a transparrent 'backend' of a variety of standard filing systems, using no extra RAM.

Solid state. No moving parts! Very quite. And no more worries about age related failure of your drives and media.

Easy backup. Store and backup your disc images on a PC and easily transfer them to/from the MMC with a flash card reader.

GoMMC simply plugs into a free ROM socket in the machine.

GoMMC accesses your 'relocated' floppies and harddiscs via slightly changed versions of standard DFS and/or ADFS filing systems (patches for eleven well known ones are provided, among which are many Acorn DFSses and ADFSses, and a few 'foreign' one like Watford DFS). These can be introduced to the system in a variety of ways (e.g. in a ROM, or automatically loaded from the MMC into sideways RAM), and, if need be, can run alongside the original versions..

Full details, including how to purchase, are on John Kortink's web site under GoMMC. 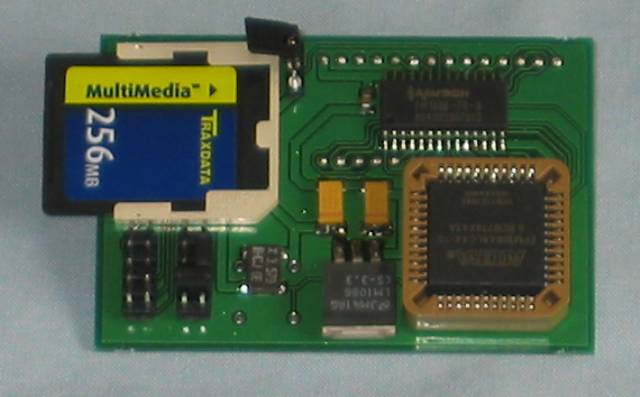 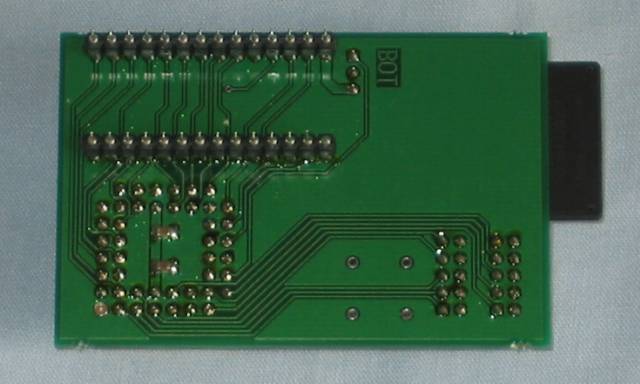 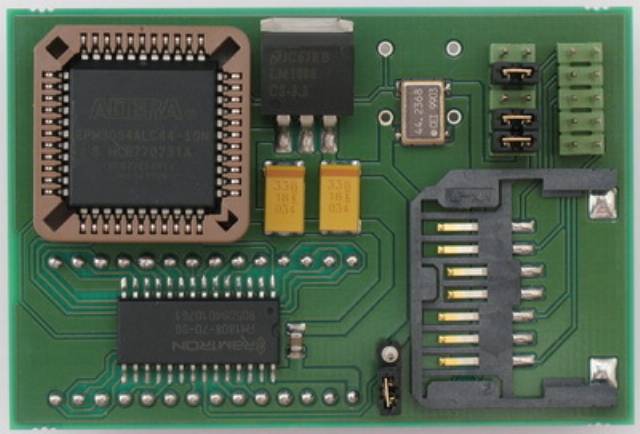 This is an improved and simplified GoMMC that John Kortink is now selling, it does not require a fly lead to an IC, making installation simpler 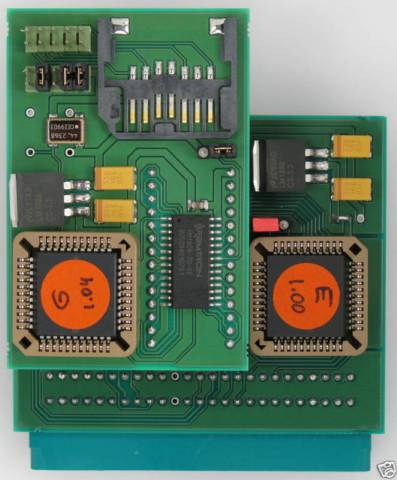 John Kortink has produced a GoMMC-Electron adaptor which plugs into the Electron expansion bus and enables the GoMMC card to be used with an Electron.

The GoMMC hardware is not very complex, it consists of a BBC ROM socket connector, a memory chip, aCPLD, an MMC socket and a few quite ordinary extra bits. The CPLD (Complex Programmable Logic Device), is an Altera MAX3000 series chip. The memory chip is a 32KB Ramtron FRAMwhich is basically a static RAM, but is non-volatile as well (i.e. it remembers its contents afer power is removed).

The GoMMC documentation is included in the software archive on John Kortinks site under GoMMC .