Sprow's Reprogrammable speech upgrade for BBC B & B+

Texas Instruments created the TMS5220 voice synthesis processor as a means to add realistic speech output to home computers such as the BBC Micro, pinball machines, and children's toys. It acts as a model of the human vocal tract which allows the speech data to be parameterised and hence compressed considerably compared with just storing raw audio samples.

The speech processor can accept data either from a host microprocessor, or from a mask programmed serial ROM - the TMS6100 voice synthesis memory. However, the high cost and minimum order quantities associated with the setup of a mask means that comparatively few TMS6100s were created, and being mask programmed are fixed in operation.

The TMS6100 emulator solves both of these shortfalls by emulating the operation of the original device through the use of a modern 8 bit microcontroller with on board flash memory. When coupled with an original TMS5220 your system can speak once again.

A typical upgrade kit consists of an original TMS5220 speech processor and TMS6100 emulator, which is a small carrier circuit board the same size as a normal 28 pin chip, along with instructions for fitting into a BBC Model B or Model B+. Except for some early Model B (pre issue 4) motherboards, no soldering is required to install the upgrade.

Further details, including how to buy are on Sprow's web pages 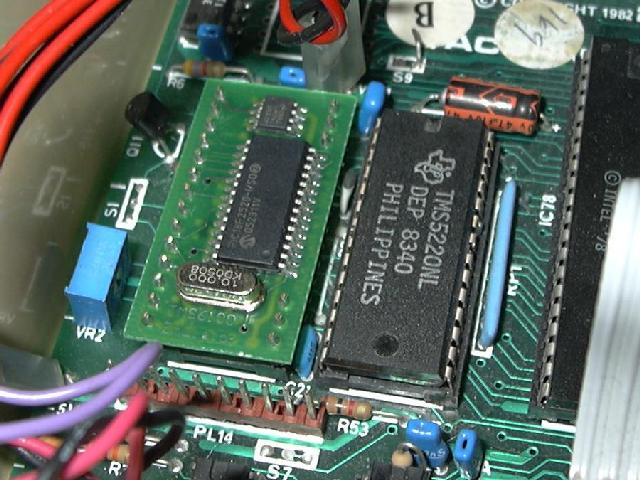 The following six document downloads are available relating to the speech system:

The document are all down loadable from Sprow's web page .