This is a small module containing (modified) MOS versions 3.20 and 3.50 for an Acorn BBC Master and is a drop in replacement for the standard 3.20. It is produced on a professionally made PCB and has a neat row of custom made, gold plated 28 pins underneath it which just plug into the operating system ROM socket (IC24). The picture shows the module (with the red dot) having been installed in a Master 128. Some Masters have IC24 soldered in place which obviously makes installation a bit trickier, although it can be done with the right tools and experience.

Year 2000 fix - This version of the MOS has been modified so that dates up to 2089 will show correctly (*TIME and BASIC's TIME$ function, both of which use OSWORD 14). I have also included a tutorial which shows the general procedure for patching ROMs. There is a complete worked example which illustrates how to modify BASIC so that it can recognise binary numbers (prefixed by "%"). It will also assemble machine code directly into any chosen bank of sideways RAM, handy when writing your own code or modifying existing ROM images. The example starts by showing how to locate the right part of BASIC, jumping to new piece of code to perform the necessary action and finally making a clean return to BASIC. All the assembly language source code for the patch is included and described in detail. There is also a section which explains how to split the ROM up into its constituent parts and how to rebuild it again with any required modifications included.

A CD will be included which gives detailed installation instructions and also some technical details on the ROM (eg differences between 3.20 and 3.50).

Compact Flash support - Growing in popularity is the use of solid state memory devices as a storage medium but a modified version of the ADFS ROM is usually required to access such devices. Support for compact flash cards is included in the ROM although please note that additional hardware is required to connect these cards

Easily reprogrammed - The 256Kx8 memory chip used here is not an EPROM but a flash device. So reprogramming it does not involve exposing the chip to UV light for twenty minutes or so. You can erase and program it in just a few seconds (with a suitable programmer obviously). You cannot reprogram the chip while it's in the machine. Being an ordinary dual in line (DIL) memory chip, it can easily be removed from the carrier board using nothing more than a flat screwdriver and some care. What's more, the use of a DIL chip means that you won't need a special adapter for the programmer.

Switch between 2, 4 or even 8 MOS images - This is currently the only Master MOS upgrade which allows you to have not just two MOS images on a single chip, but four or even eight. As supplied, the module provides modified versions of both MOS 3.20 and 3.50.  A jumper on the carrier board is used to select the required image but a wired in toggle switch arrangement could be used if you prefer. A suitable switch assembly is included in the kit.

Because the memory chip itself is in an ordinary socket, you can readily upgrade it to a 512Kx8 device (eg AM27C040). This would permit you to have up to four images installed. And a 1Mx8 device (eg M27C801), surprisingly inexpensive, means you are really spoilt for choice with up to eight images at your disposal. For example you could have a standard 3.20, standard 3.50 and still have room for six more variants on the same chip!

Why would you ever want more than two versions of the MOS? Well, everyone uses their machine in different ways. Something that one person finds quite handy - Viewsheet for example - another may have no use for. If you never use a particular ROM then it makes sense to take it out and replace it with something else. Of course we cannot predict everyone's requirements, and that's why the CD explains the procedure for replacing individual ROMs and building up a final MOS image to be programmed into a suitable device. You can customise the MOS in virtually any way you want.

Quick summary. The module provides modified versions of MOS 3.20 and 3.50 on a single 256Kx8 flash memory. Support for compact flash memory and year 2000 fixes are included. A 512Kx8 EPROM, suitably programmed, would allow up to four MOS images. The module can also accept a 1Mx8 EPROM (not included) and this would allow up to eight MOS images. A single switch assembly is provided (for changing between two images although the jumper system supplied may be entirely satisfactory if you do not foresee changing ROM images very often. Switching to another image involves changing the jumpers (or toggle switches if fitted), followed by a Ctrl-Break. The supplied CD contains tutorials on how to modify the MOS images and prepare them for programming. 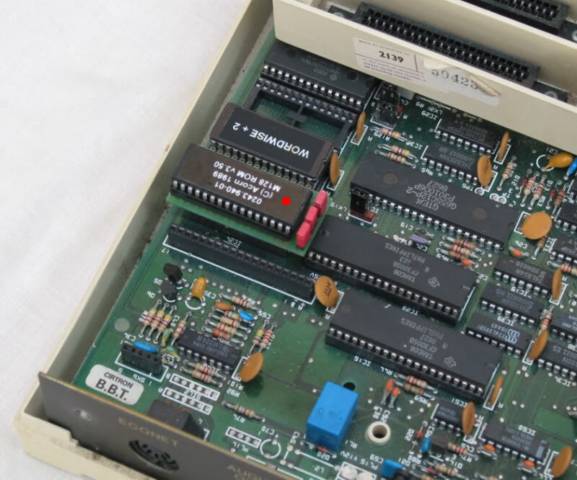