Bush Internet was a joint venture between Alba (80%) and Virgin (20%); created specifically to sell simple "one button connect", low cost, mass market Internet devices aimed at the average person in the street. The various devices they jointly launched included, Internet enabled TV and external set top boxes which enable a colour TV to become Internet connected. Pace designed the Internet Surf Set for Bush. It is OS is based on NCOS from the Acorn Network Computers. It has an IR Keyboard, remote control and a built-in 33.6k modem. In simple terms you plug it in (modem, TV, power) switch on and select connect to the Internet and off you go surfing!

Unfortunately the Internet Surf Set was a commercial failure. The target of 500,000 sales in the first 12 months of operation was over optimistic, with a total of only 186,000 sold to retailers and only 115,000 actually in consumers' homes. It originally sold for £149 with Alba providing a £45 subsidy. The retail sales at the subsidised price of £149 were still very dissapointing. The price was reduced to £99 in June 2001. And finaly in December 2001 they threw in the towel having lost around £17,900,000. But Internet Surf Sets ended up selling for £20 in Toys‹RUs and finally then being given away by Time as a freebie if you bought something else!

If you want an Internet Surf Set, there are usually several up for auction on ebay. Try searching for "internet surf set" in the "computing" category.

Because it is, basically, a RISC OS computer, various people have discovered how to do interesting things with it in particular to convert it into a RISC OS desktop computer. How to do this is summarised belowSome options are:

There are serveral different models:

The box contains a ten metre telephone cable; power supply; remote control and batteries; a 29-page manual; quick-start guide; email guide; warranty card; SCART cable and, of course, the Surf Set itself. The telephone cable plugs into one of the three sockets on the back of the box and a standard phone socket, providing a second socket for any devices whose connection may have been "borrowed". The remote control is much larger than usual and has a limited set of buttons for navigating web pages whilst closed. However, when flipped open it reveals a QWERTY keyboard for typing emails and URLs which, although small and rubbery, is adequate for typing reasonably long emails - with practice. The documentation is well written: both clear, concise and technically accurate. It guides users though the installation process in easy steps, but a peak-rate helpline is available for those who get stuck. Setting it up and connecting to the internet is pretty easy and worked first time.

The IBX100 has an ARM750FE clocked at 48MHz with 8MB memory on single EDO SIMM. The modem is an on-board Lucent modem (which appears as podule 0). There is support of either the IR keyboard supplied or a serial PS/2 keyboard. Only(!) 3 printers are supported -  Lexmark 1000/1100, Canon BJC-1000, and Canon BJC-2000. Unlike the Acorn RISC OS computers, the IBX100 does not have CMOS memory to store configuration data instead it has a small NVRAM. Also there is no Real Time Clock (RTC), so the IBX100 will always think the date is 1 Jan 1970. There is no sound support hardware.

An Iomega PPA ZIP100 can be connected to the parallel port, but the disc must be formatted in the Argo Internet format, and is documented in the Argo Zip Driver . Modern ZIP drives are not supported, nor are other (e.g. PC format) 100MB ZIP discs. 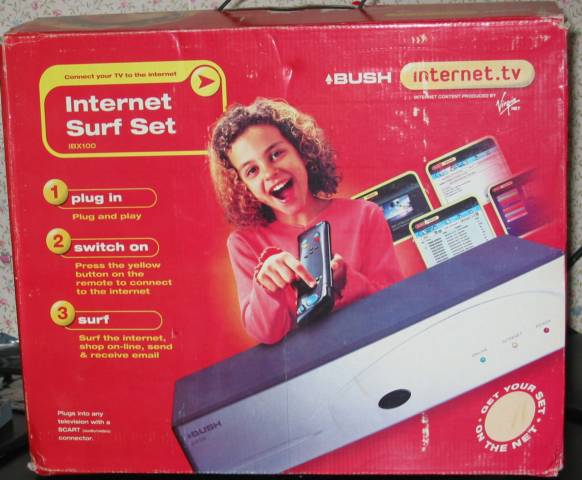 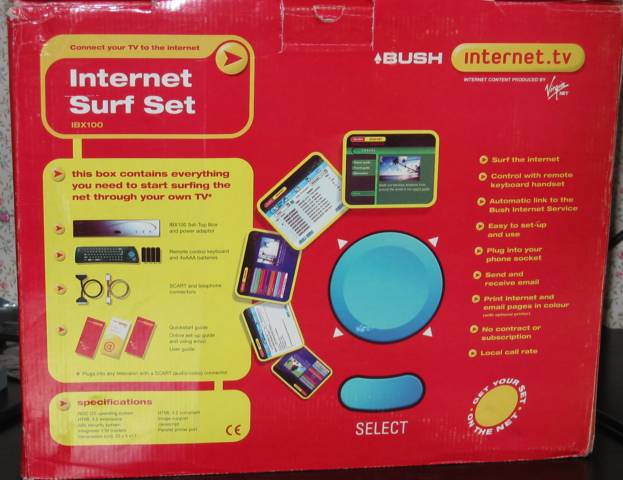 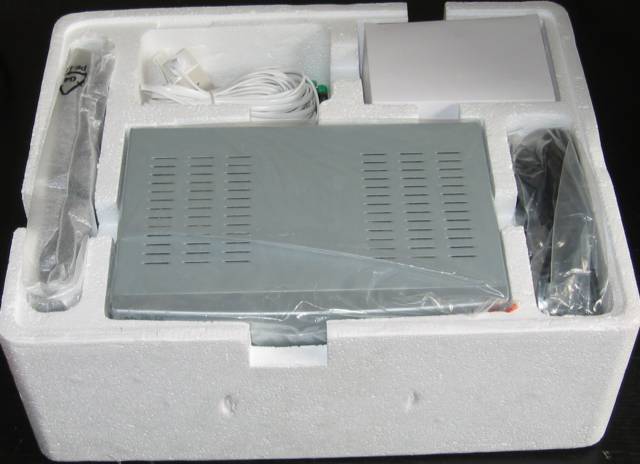 The back view of an IBX100, showing from left to right, the 6V DC Power socket, SCART TV connector, Parallel printer and modem socket. 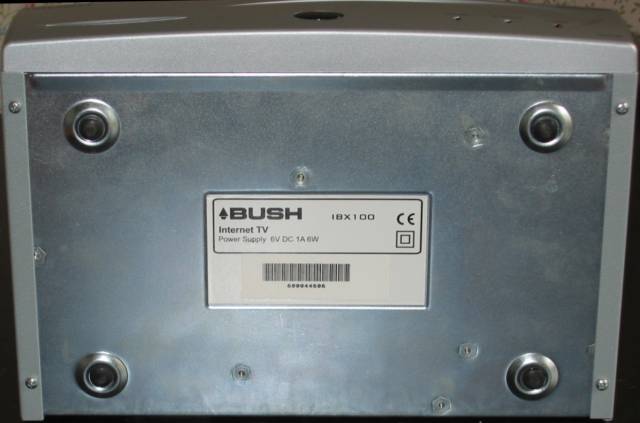 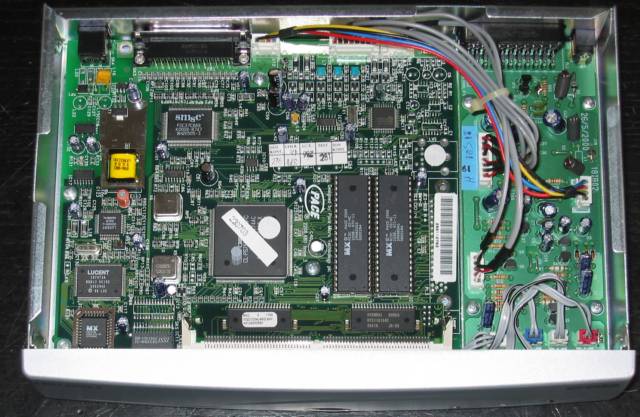 With the top cover removed, you can see the IBX100 motherboard. The main feature is the big square ARM7500FE CPU in the middle and the two NCOS ROMs next to it. At the front, in the middle is the 8MB EDO SIMM. On the right is the TV module feeding the SCART socket. 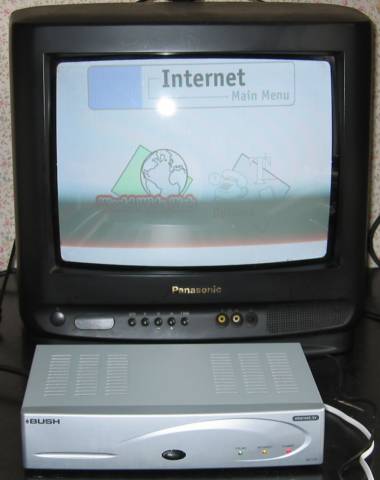 The initial screen gives two options, dial Bush Internet and connect to the internet on the left and Configuration options on the right. 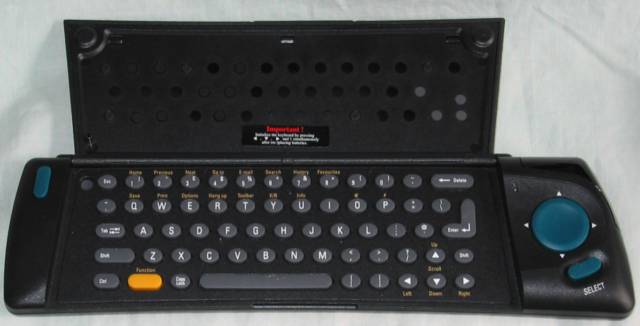 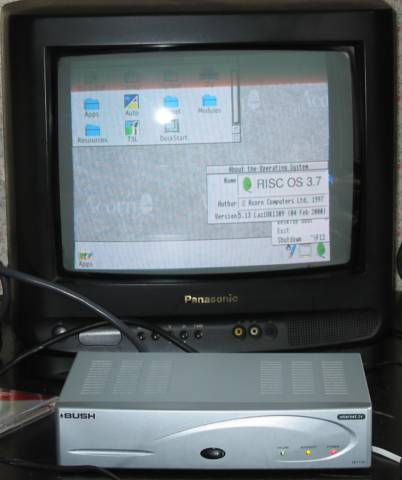 How to get an IBX100 to run a RISC OS desktop is described here .

Some more nice pictures of the insides of an IBX100 can be found on Ian Spray's site  . Information on the pinouts on the motherboard can be found at Richard A Smith's IBX100 Set Top Box Information Page.

The IBX200 is a redesigned IBX100 with a much improved motherboard layout and a VCR out SCART port so that it can be used with a TV and VCR. A full infrared keyboard is also included instead of the remote control supplied with the IBX100. Functionally the IBX200 is identical to the IBX100. 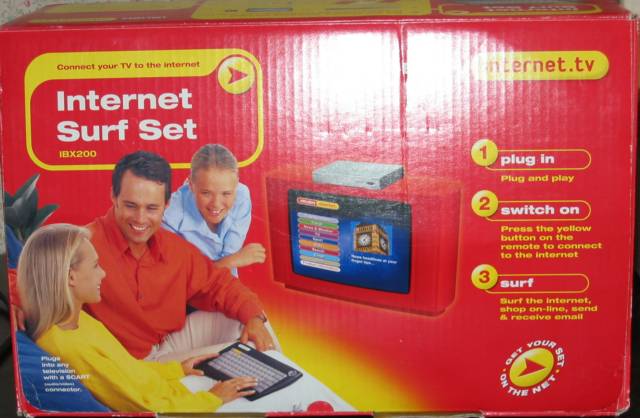 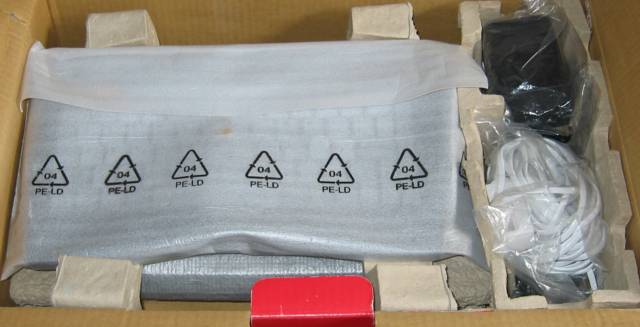 In the box, the IR keyboard is on top with the IBX200 underneath. The SCART cable, modem cable and power supply are on the right. 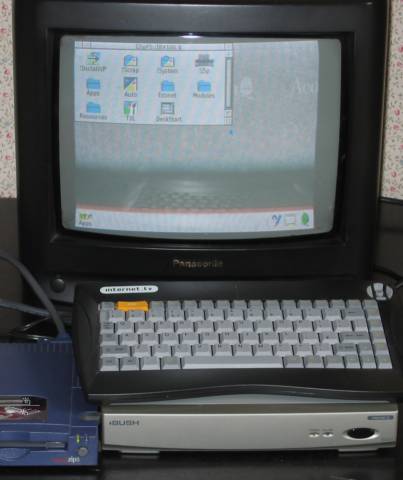 On the back you can see, in the middle, the second SCART out socket for connection to a VCR. 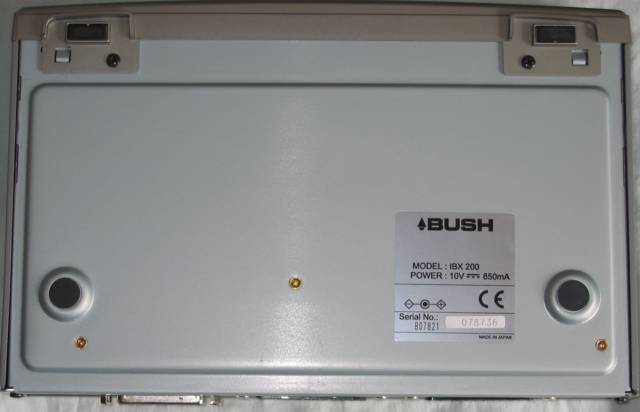 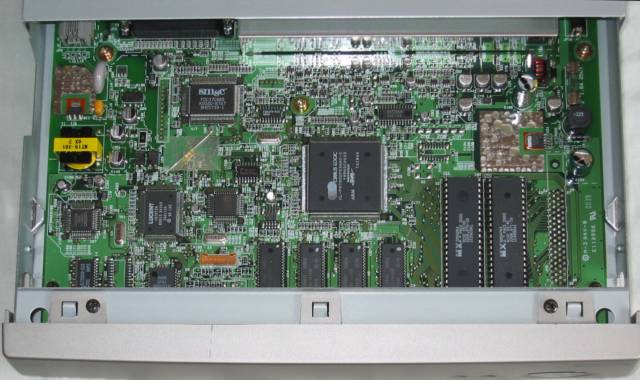 IBX200 with top cover off

The IBX200 motherboard is much neater than the IBX100. But the basic componenets are the same with the ARM7500FE in the middle, the 8MB RAM is the 4 chips below the ARM7500FA. The 2 RISC OS-NC ROMs are a later build than the IBX100. The SCART ports, at the top, are shielded. 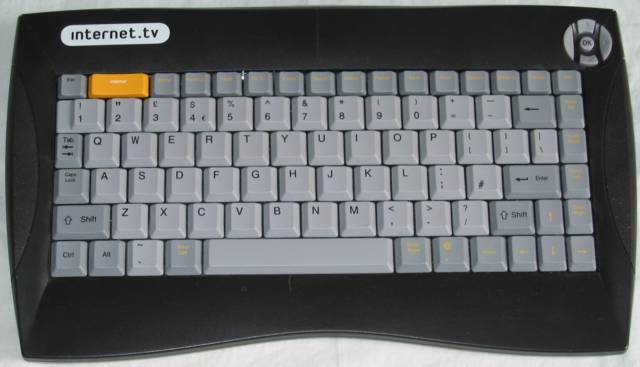 The IBX202 is identical to the IBX200 except it is configured, by default, to connect to Freeserve (now Wanadoo part of France Telecom). 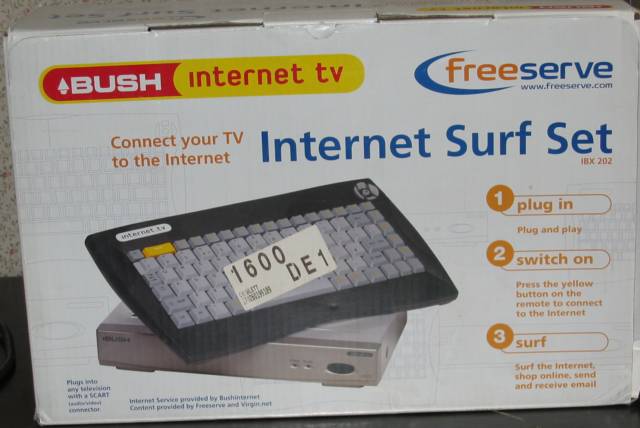 The IBX202 is the same as the IBX200 except for the default ISP which is Freeserve, instead of Bush Internet.

The IBX250 is based on the IBX100 but has 2 SCART sockets so it can support connection to a VCR. In side it has the same motherboard as the IBX100, but the SCART card is bigger with the 2 sockets. 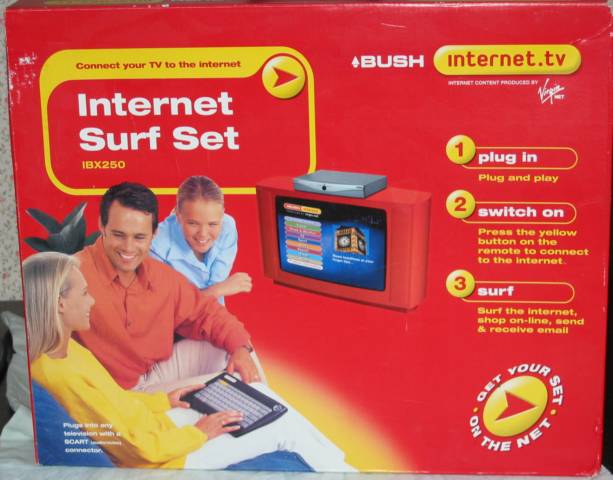 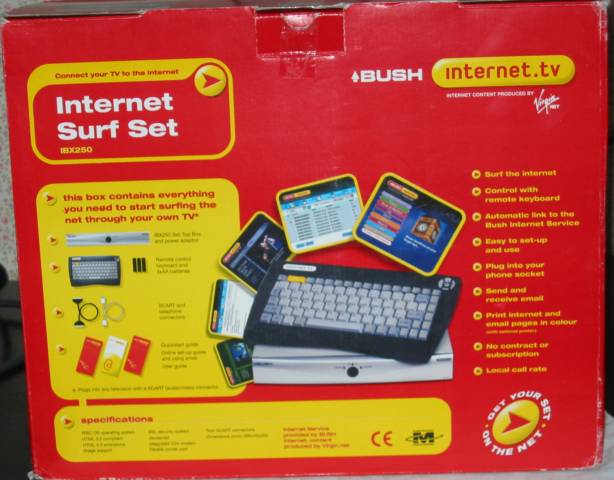 The 2 SCART sockets can be clearly seen on the left next to the power in socket. On the right is the printer interface and the modem cable socket. 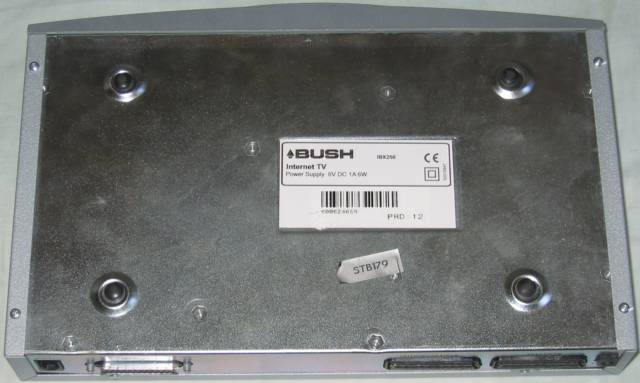 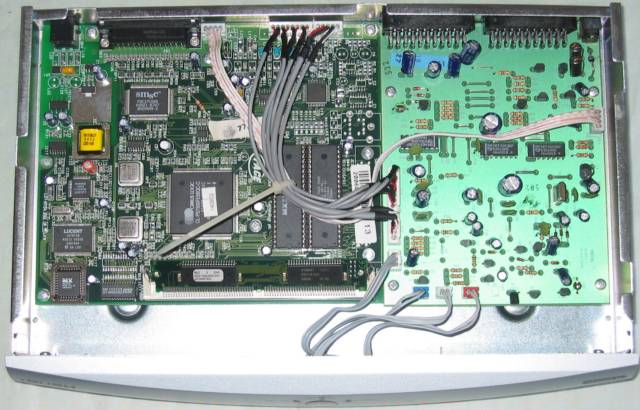 With the IBX250's top cover removed, you can see the motherboard on the left which is the same as the IBX100, but on the right is the larger board supporting the 2 SCART sockets. On the IBX250 motherboard, the big square chip in the center is the ARM7500FE CPU with the 8MB RAM SIMM card below it. To the right are the 2 large RISC OS-NC ROMs. 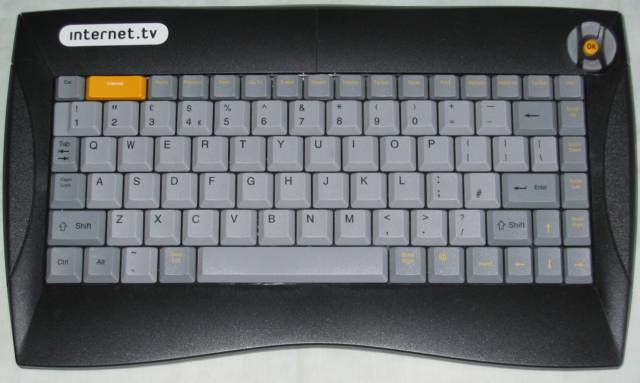 This keyboard model number is KB200 and it is also used with the IBX200s.

Thing to do with an internet Surf Set

It does not support:

From the main screen the following commands can be typed:

Other keys that have been discovered are:

The following commands can be entered from the URL bar:

To get a useable screen type:

This will put you into MODE 12, which is much easier to work with on a 14 inch television / monitor.

To read the password to the ISP configuration page you can run this program:

To display the Dial password you can run this program:

On a IBX-260 for example this program should return: "dial".
To display the ISP Phone Number, you can run this program:

Do not follow the instructions to get a "*" prompt and then type "desktop". Various modules are missing from the desktop boot sequence, so it won't start. Because the Internet Surf Set NC OS does not have all the modules and files needed for the desktop, they have to be softloaded from a ZIP100 drive. You copy the missing files from a donor system (preferably RISC OS 3.7), onto the zip disc to be softloaded prior to starting the Desktop.

Starting on the donor system:

ARM Linux has been ported to the Internet Surf Set by Simtec amongst others. Some Linux resources can be found on Vince Sanders  site.