In June 2003 I bought this A500 on ebay from Paul Fellows, here is his description of it from the ebay auction page:

The case is a very heavy metal box, with a plastic moulded front which has the floppy drive and keyboard connector mounted in it. The Keyboard is again a metal cased unit and plugs into the main computer using a "phone" style plug. The keys on the keyboard are the usual QWERTY layout, but there are some interesting extra keys such as "HELP" and "MENU" that were specified for the ARX operating system that never was released! The mouse - three small buttons - is also very much more substantial than the ones eventually used with the Archi range and this is plugged into the keyboard on a cable via a 9-way D-type. Inside the case there is a 20Mb hard drive, the main board which has 4Mb of ram and the 4 main chips. Originally fitted with an ARM-1 (3-micron) these machines were upgraded to ARM-2 (2-micron) with the multiply instruction during the period when they were in use for development.

The machine is fitted with RISC OS 2.00 in ROM (but a special version for this machine as there are some slight hardware differences - such as the serial port controller and hard drive interface). The back of the machine is repleat with all the ususal I/O for monitor, econet,printer, serial port etc A four slot backplane is present, and all-in-all this machine is functionally the equivalent of the A440 which took another 2 years to appear on the market.

HISTORY OF THIS ACTUAL MACHINE

This machine is the one I used for development of the Operating System at Acorn. Originally these machines were hooked up to BBC micros via an umbilical into the tube port and all the I/O was done by the Beeb. Over time we gradually got the various sub-systems alive, and moved them over to the A500 native. First the video and graphics, then the keyboard, then the file systems and so on. This machine was on my desk when for the very first time ever we removed the umbilical, and rebooted it - and watched it come up to the basic prompt on its own. Arthur was born!

From there it was used for further development even after the A305 and A310s started rolling off the production line - Well it had 4M and a hard drive so was much better than the ones we were selling. This machine then later saw service when I developed ABC (basic compiler) and Genesis on it and was only finally retired when I got my hands on a A440 with an ARM 3 card. It still works and has been used on an off for "leisure" rather than work ever since. However, it is time for it to find a new home. So, who will make me an offer for this much loved and venerable peice of Acorn history? PMF "

Here is the A500 Hardware Guide. It is a internal Acorn document and is a "work in progress" rather than a finished manual. The A500s were used internally by Acorn and many modifications made so this may not be an accurate description for an actual A500.

The A500 was running RISC OS 2 when I bought it, but investigation shows its past as a development system. Much of the OS ROM is empty space, instead the modules are loaded from disc at boot time , fortunately the hard disc is still working (I have a backup on a different computer). I also acquired a set of Arthur 1.20 ROMs for the A500 which I have installed and booted successfully.

Here are some pictures of the A500: 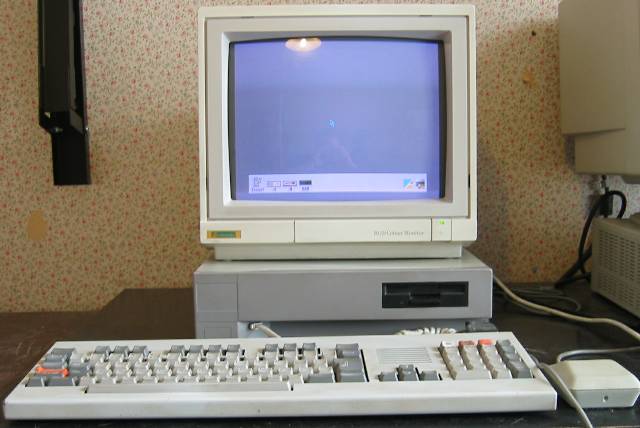 A500 running RISC OS 2. Note the unusual keyboard and the telephone jack keyboard on the left hand side of the case.

Note that the RISC OS 2 date is different from the normal ROM versions which are dated 05 Oct 1988. This version of RISC OS 2 is a development version and loads most of the OS modules from disc, making it easy to install and test modules without having to make and install new ROMs. 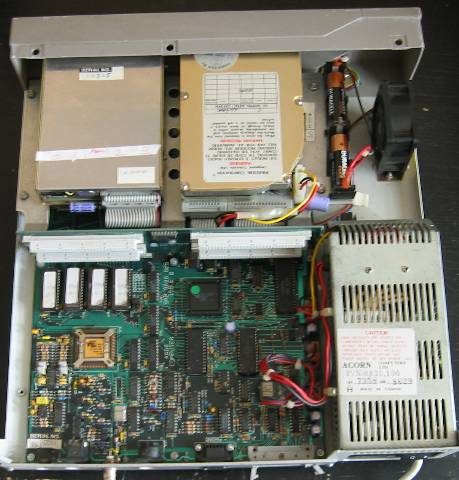 The floppy disc is top left, with the ARM2 chip underneath. The 20MB hard disc is top right. The power supply is the same as a BBC Master with an extra 12v (yellow) lead. The backplane is in the middle of the machine with the white labeled RISC OS 2 ROMs in the middle left. 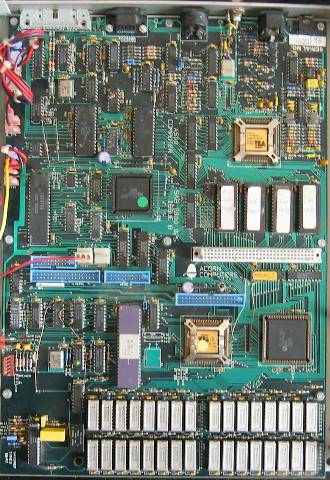 The front of the A500 is at the bottom of the screen. The 4 MB RAM memory is at the bottom. The ARM2 CPU is the black, square chip above the RAM with the golden MEMC1 next to it. The blue sockets in the middle are the ST506/MFM interface. The RISC OS 2 ROMs are above the backplane connector. At the top are the port connectors, from left to right: Centronics, Serial, RGB, Video, Econet and Audio. If you look carefully you can see some patches to the board in the top left.

The connectors, from the left to right are Audio, RGB, Video, Econet, Serial, Centronics interfaces. Power supply on the right and the backplane visible as I have no A500 blanking plates. 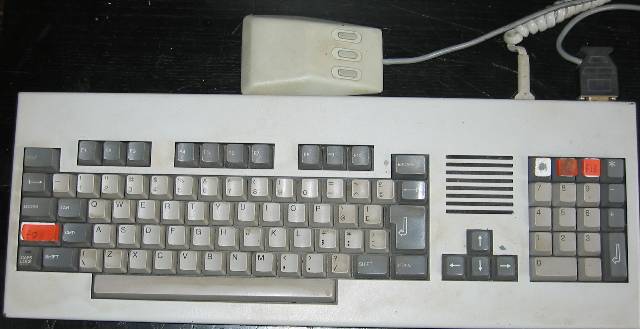 A500 keyboard and mouse

In 2008 I bought this A500 from Paul Middleton (Uniqueway and RISCOS Ltd), it is in a rather poor condition and is missing the case top. However it is of historical interest as it has a prototype ARM3 CPU on a daughterboard and ran RISC OS 2.06 which was a development version of RISC OS used in the development of RISC OS 3. 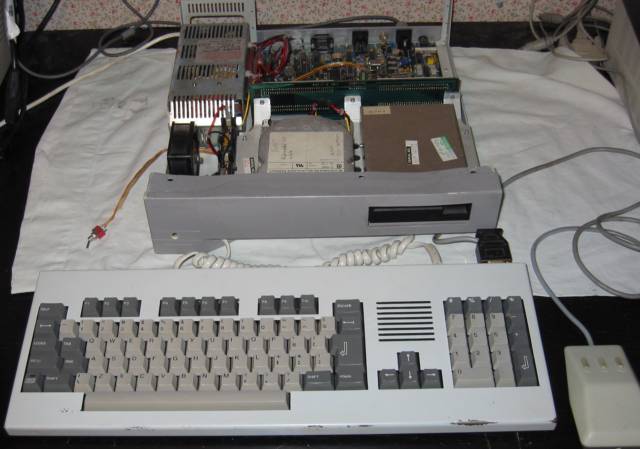 The front cover of the A500 is no longer attached to the chassis, I have just put it in place for the picture. I am uncertain what the switch, on red and yellow wire, coming from the left side does, but I think it may enable/disable a VIDC enhancer. 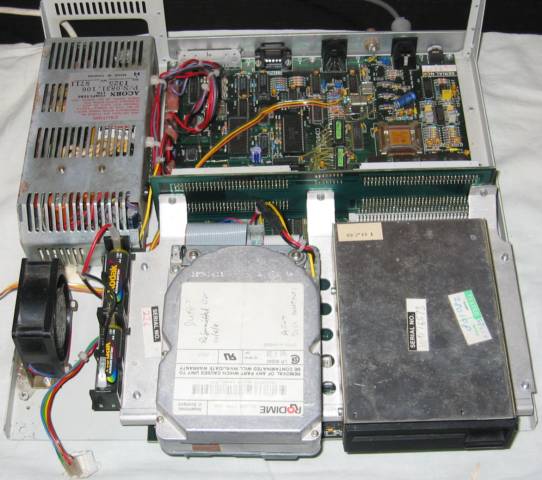 Acorn A500 with front removed.

The A500 with the front removed (it is not actually fixed on anymore) showing: 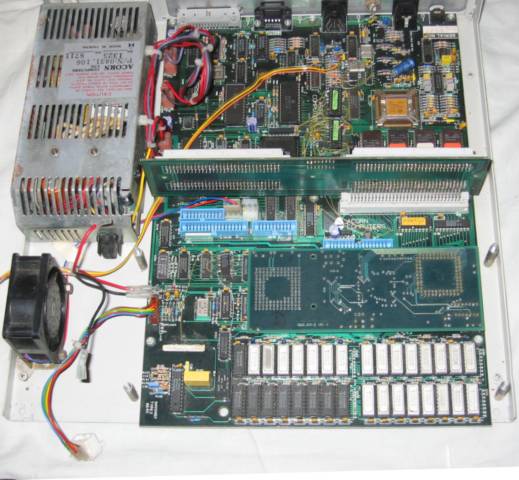 Acorn A500 with discs removed.

Removing the disc drives shows the A500's 4MB RAM (at the front) and the daughterboard holding the ARM3 CPU above. In front of the backplane are the light blue sockets to connect the MFM hard disc and to the right the floppy disc drive 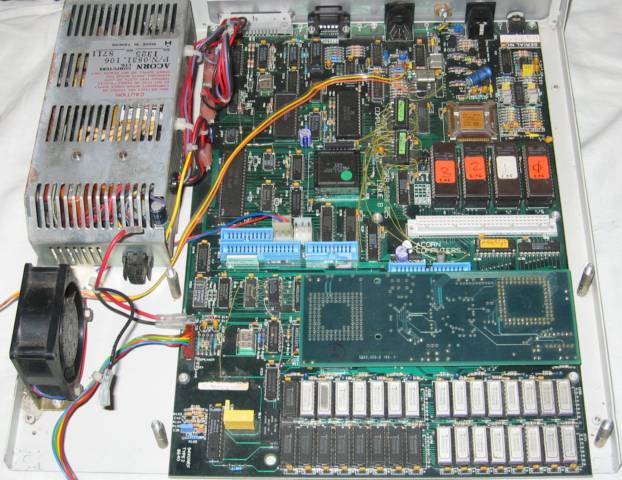 Acorn A500 with backplane removed

Removing the backplane shows the orange/white RISC OS 2.06 ROMs, the VC2311 IOC with the green spot and the gold VC2303 VIDC1. 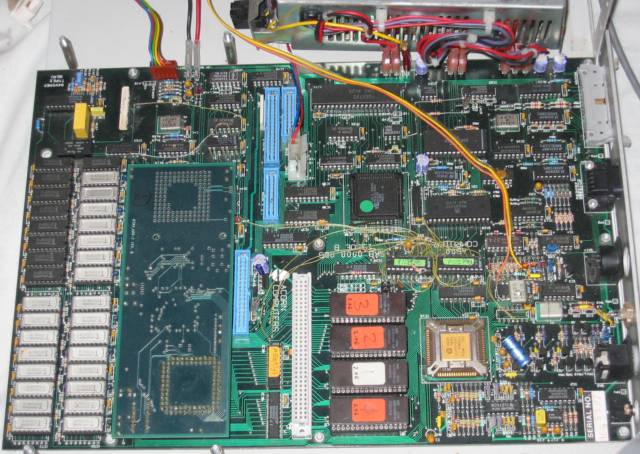 Acorn A500 motherboard (seen from right)

The A500 motherboard shows a lot of wired changes and modifications. The main change appears to the "Fast A500 " upgrade which is responsible for the 2 ICs with light green labels and the majority of the wiring modifications. 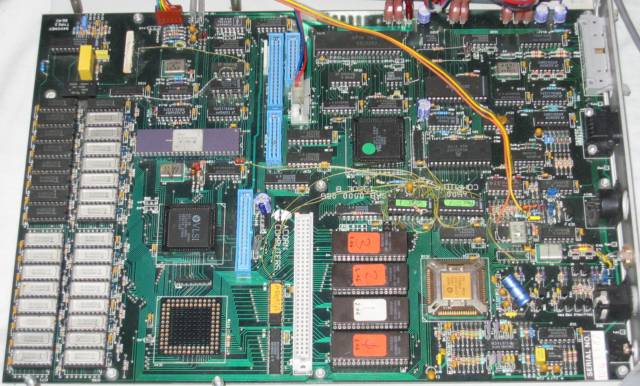 Acorn A500 motherboard with the CPU daughterboard removed

Removing the CPU daughterboard shows the socket which an ARM2 was installed before the upgrade. The VC2304A MEMC1a is above the CPU and the HD63463 MFM disc controller above the MEMC1a.

Here is a HiRes picture of the A500 motherboard .

On the left is the plug that connects to the ARM socket on the motherboard. In the middle is the prototype VL86C020 ARM3 with the date code 8917. On the right is a unused space for another IC, it is possible that this was for an FPA10 but this is a guess. The daughterboard part number is 0283,600 Issue A. 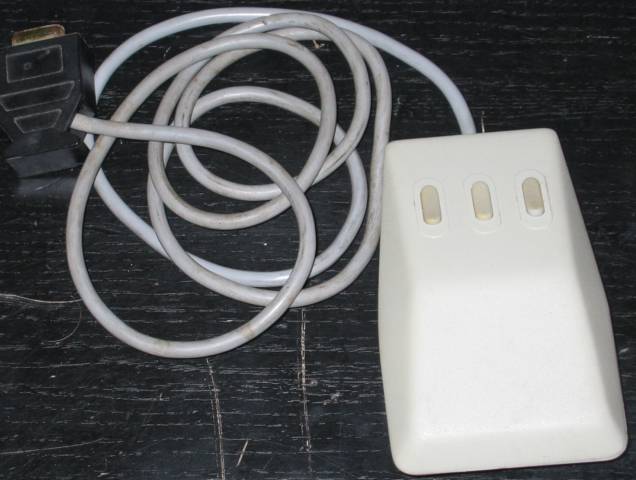 There are no benchmark figures for the A500 because neither !SICK nor !ARMSI runs on it.