The Communicator is a bit of an anomaly as it is possibly the only genuine 16 bit computer Acorn made. It seems to have been designed as an intelligent terminal for use with Prestel and other early electronic mail/Bulletin board type systems. Details of the Communicator are hard to come by, I have searched both the web and usenet groups with Google and found some contradictory statements.

The Communicator has a GTE G65SC816P-2 CPU which is a 16bit version of the 6502 and has a segmented memory. The 65816 was also used in the Apple IIGS. The Communicator is reported to use the Electron ULA (BTW this must date it to 1985 or later when Ferranti was finally able to ship it in volume) but does not contain a Ferranti ULA, instead there is a Mietec IC with an Acorn part no. 0252,602, is this also a ULA?

The Communicator has 512K of RAM expandable to 1024K, 32K CMOS RAM and 256K ROM. The applications included in ROM were, View, Viewsheet, Comms and Terminal Emulation.

There is no disc storage internally and no interface for external storage. The only filing system interface is Econet and that needs a standard Econet module (as used on BBC Master). It has an integral, BABT approved, modem. The ports are Display Output, Printer Output, Serial (uses a Telephone type connector) and on-board modem.

There is also an Italian language variant (Acorn was owned by Olivetti at the time).

The Acorn product codes for the Communicator include:

Luckily I was able to buy a set of communicator manuals (in English) which make the Communicator much easier to use, even in Italian. There are 2 user manuals and 2 technical reference manuals. I am scanning the 2 user manuals although it is not easy because there are lots of grey images which scan badly and occupy lots of space. The manuals are:

I bought my Communicator on ebay from a seller in Italy so it is the Italian variant, with the software in Italian! The Communicator works from an Electron Plus 3 mains adapter, with a Microvitec Cub monitor plugged into the display socket. It powers up into a menu system which I have tried to use but my Italian is just not good enough (actually non-existant)! However the startup message is:

and from BASIC *FX 0 gives: 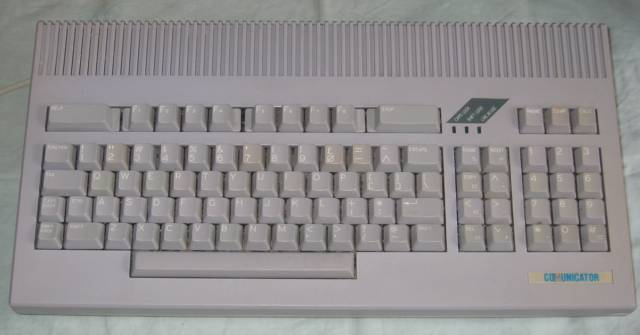 Here is a  Hi-Res picture of the Acorn Communicator .

Right hand side of the keyboard showing the motherboard expansion.

The back view of the Communicator showing the ports. From left to right, they are Display, Econet, Printer, Serial, Power in and volume control. The cable on the right is the modem cable. The serial port uses a telephone type connector.

Here is a HiRes picture of the back of the Acorn Communicator . 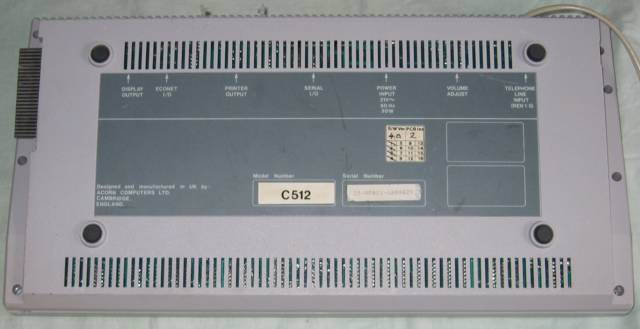 Here is a HiRes picture of the Acorn Communicator (bottom) . 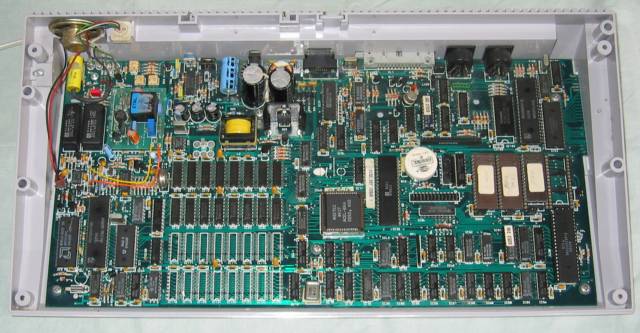 Here is a HiRes picture of the Acorn Communicator without the keyboard . 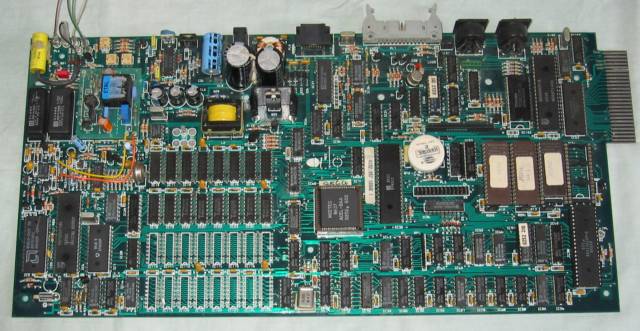 The Communicator's motherboard has its CPU at the bottom right, with the white labled ROMs above it. and the expansion connector at the top right. Along the back are the ports starting with Display on the right, then the Econet port with the sockets for an Econet module just visible in front of it., then the printer port and the serial port. The power in socket is just behind the 2 large capacitors. The volume control is to the left of the blue capacitor. The on board modem is in the top left. On the bottom left, the empty chip locations are where the upgrade to 1024K RAM is installed, with the initial 512K RAM above. Finally the large, square, socketed chip in the middle labelled "Mietec" might be an Electron ULA(?).

Here is a HiRes picture of the Acorn Communicator motherboard 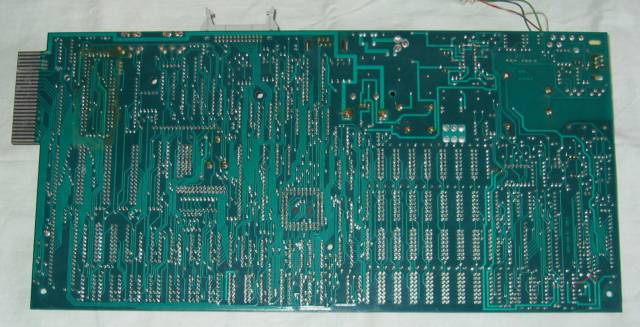 There is a small hardware fix in the bottom right, made with a red wire.

A Communicator in a briefcase, reportedly an ultra-stylish '60s two-tone blue suitcase! Acording to Acorn User No.57 (April 1987), the Briefcase Communicator was produced for Advanced Medical Communicationns, which supplied the pharmaceutical and Health markets with communications equipment. It was for use by pharmaceutical reps on the road. One version included a flat screen in the breifcase [Wanted]