Solidisk produced a CPU and Keyboard case for the BBC Micro which was described in an advertisement in Acorn User (June 1986):
"This compact steel case can hold a BBC and two 5.25 inch half-height floppy disc drives. The keyboard is housed in a seperate case connected by a 24 inch lead. With the monitor on top, it improves your viewing angle and leaves your desk uncluttered."

This BBC Micro model B has an Issue 3 motherboard and an ICL serial number. I bought it on eBay in August 2009. It has a Solidisk 1770 Disc interface and a Solidisk SWR256 256K RAM/ROM board. 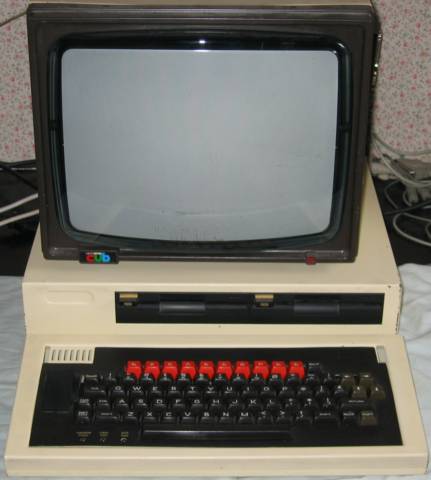 The Solidisk CPU and Keyboard case is a two box solution. There is the keyboard box and the CPU box. The Microvitec Cub monitor sits on the CPU case. The perspex keystrip holder is missing from the keyboard case. 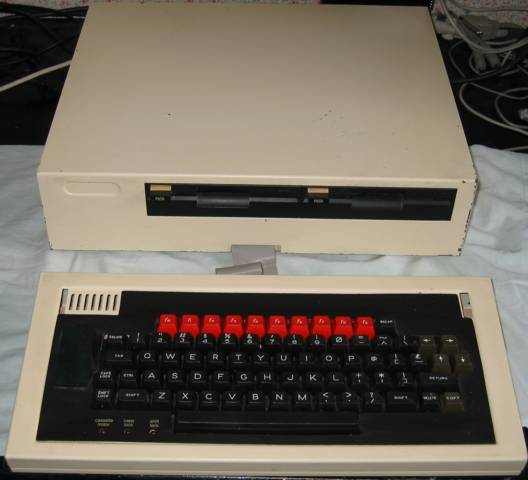 The Keyboard case is connected to the CPU case by a ribbon cable.

The back of the CPU case shows that the case only replaces the top of the plastic BBC case. The standard BBC ports are visible, from left to right:

The power supply is on the left.

The cooling slots apove the ports allow you to see the BBC motherboard, this is a sign of an early BBC Micro before they were modified to prevent little fingers getting in. The two screws are missing from the holes marked FIX, the Solidisk CPU case does have matching brackets for them.

The keyboard is fixed in the Keyboard case and has a ribbon connection to the CPU case. 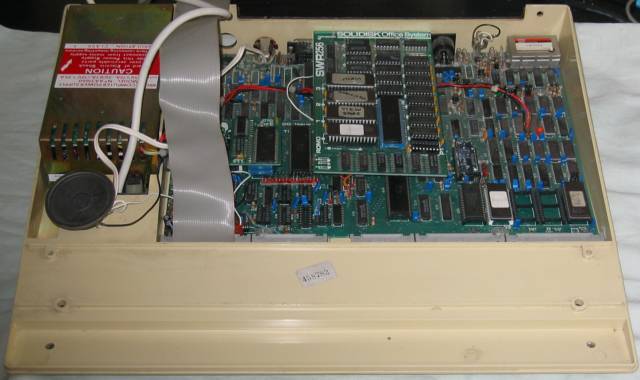 The lower half of the case is the standard BBC case, without the keyboard which is in a separate case. The picture shows the white power lead and ribbon cable which connect the two 5¼" floppy disc drives. It also shows the Solidisk SWR256 board in the middle and the Solidisk 1770 DFS next the the ribbon cable. 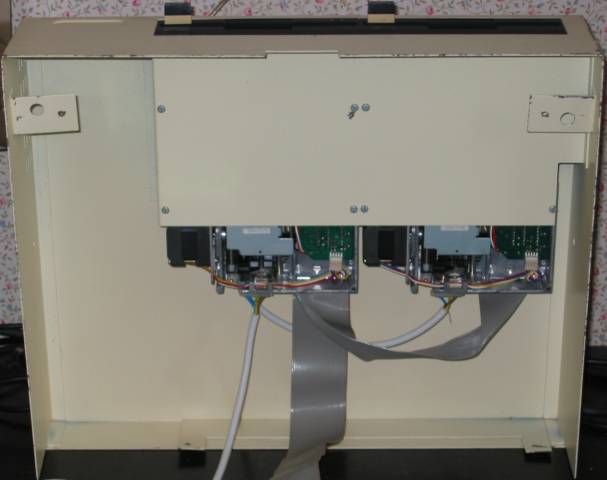 The two Epson SD-540 5¼" floppy disc drives in the top casing with the white power lead and the grey ribbon data cable. Also visible are the prackets at the top and bottom for the BBC case screws. 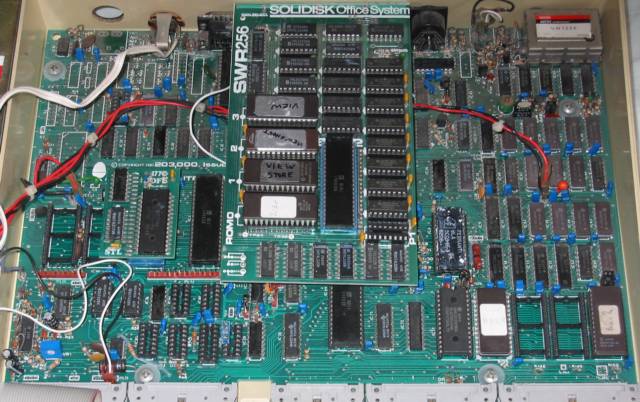 The BBC Micro motherboard with the Solidisk 177) Disc interface and SWR256 fitted. Econet and Speech upgrades are not fitted. It the top left is the additional audio socket, fitted in the reset button cut out. The SWR256 has View, Viewsheet and Viewstore (silver labels) and DFS2.28 (white label) fitted.

The BBC Issue 3 on the motherboard and the orange ICL serial number 008193.

The under side of the CPU case showing the orange ICL serial number 008193. The blue plug in the disc drive socket on the right goes back inside the case and connects to the floppy disc drives, as does the socket in the aux power socket.