The following models were produced [that I know of]:

Here are 2 Acorn A400/1 product brochures with details of the new range:

Here is the Archimedes Welcome Guide (for RISC OS 2)

My A410/1 was my main computer from 1989 to 1994 until I bought a RiscPC. I think I bought it from Norwich Computer Services, because I remember driving over to collect from Bedford where I was living. When I bought it I traded in my A310 with twin floppy drives. the major upgrades were a memory upgrade to 4MB, 40MB hard disc, a VIDC Enhancer and an ARM3 CPU. I also bought an Iiyama monitor which was why I needed the VIDC Enhancer. Over the years I installed and removed quite a number of podules.

In 1990 I went to work in Singapore for 2 years and my A410/1 went with me, I think it was the first Archimedes in Singapore. It certainly confused many Singaporeans who even then were hooked on PCs 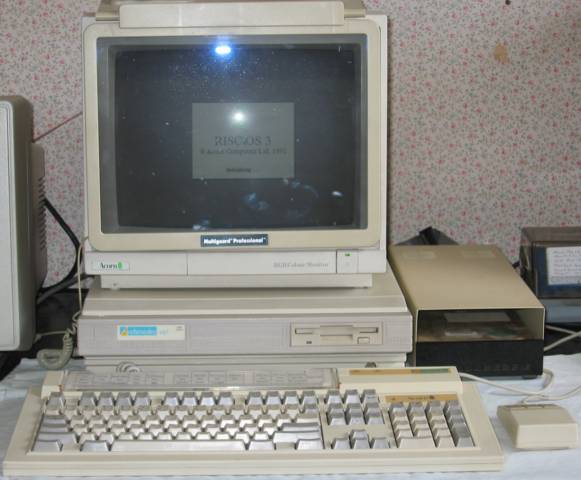 This A410/1 has an external hard disc (on right), the hard disc is an ST-251. The monitor is an Acorn AKF12 with a Multiguard and glare screen and document holder.. 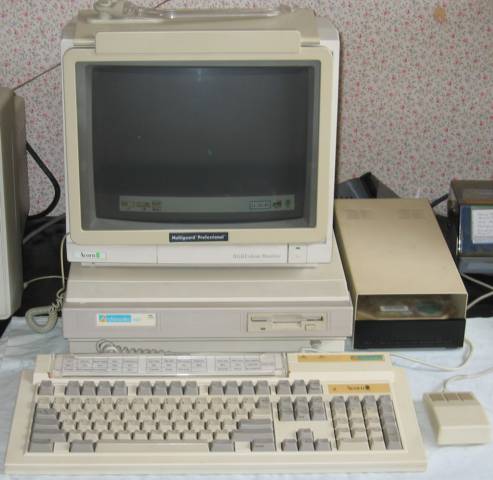 The desktop shows the hard disc icon on the far left of the icon bar.

This picture shows the back of the A410/1 with the ports at the bottom and the podule expansion slots above. The blanking plate is missing for podule 2 and podule has a Beebug 5¼" floppy disc interface installed. The ports, from the left, are: 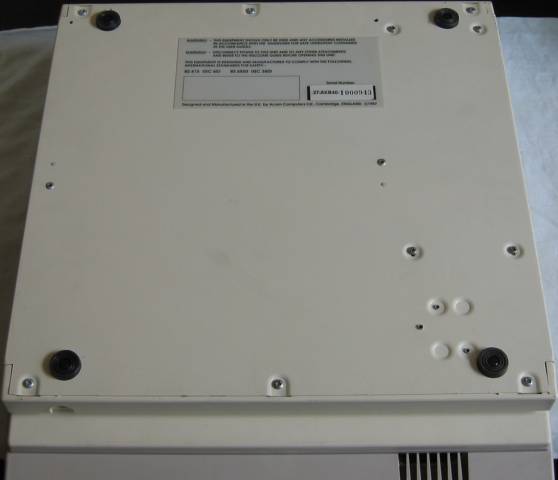 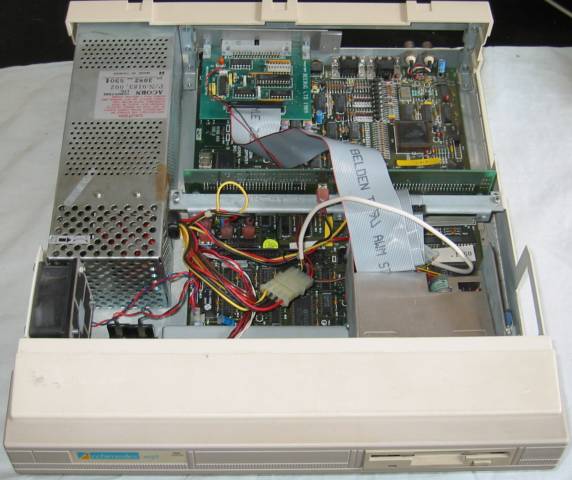 Acorn A410/1 with top cover removed

This picture shows the internals of the Acorn A410/1: 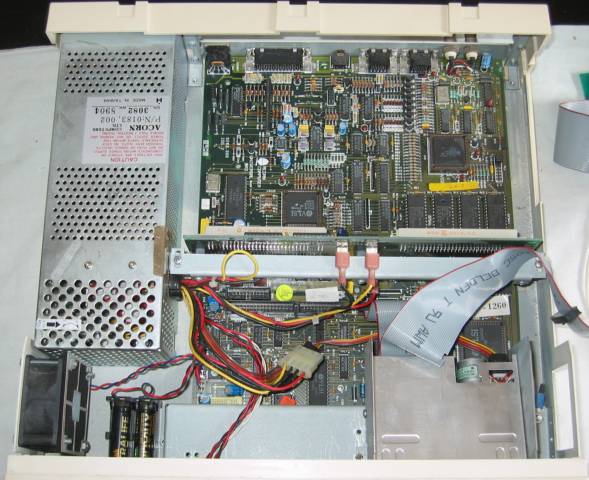 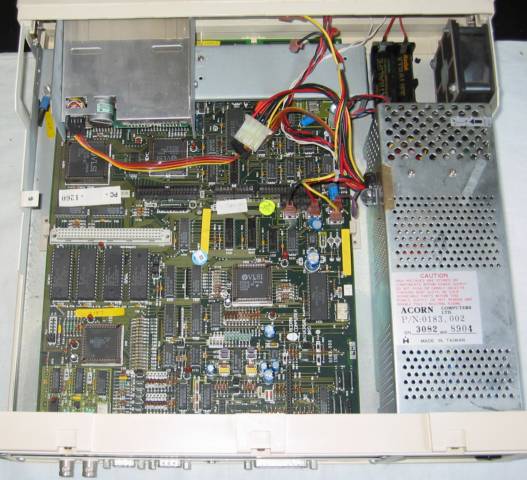 Acorn A410/1 with backplane removed 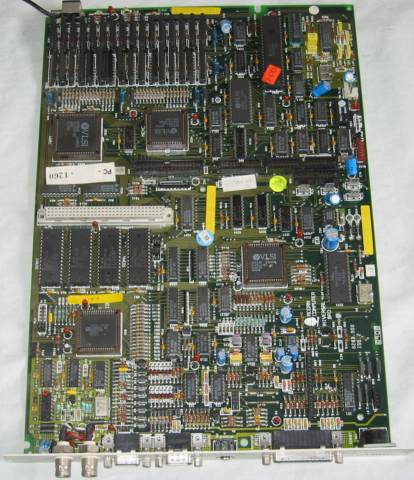 This picture shows the Acorn A400/1 motherboard, the Acorn Universal board is used in all models. From left to right and bottom to top the picture shows:

Here is a HiRes picture of the A410/1 motherboard . 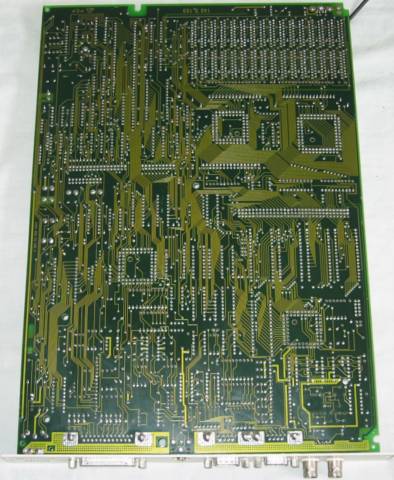 I bought these 2 A420/1s in 2004, one had been deliberately damaged (I think they were rescue computers) with many of the ICs and motherboard smashed up with a screwdriver or similar tool. I rebuilt it, it's the AKB44, but it is a bit of a mongrel.

The first A420/1 is an AKB46, which is the product code for an A440/1 Learning Curve. However it has 2 MB memory, no ST506 hard disc and A420/1 on the front. I have added a Watford Electronics 25MHz ARM3 Upgrade,  Pinapple Digitiser,  VTi SCSI and user port podule and an Atomwide Ethernet III podule which is not really useable with only 2MB RAM, especially with the Universal Boot installed. 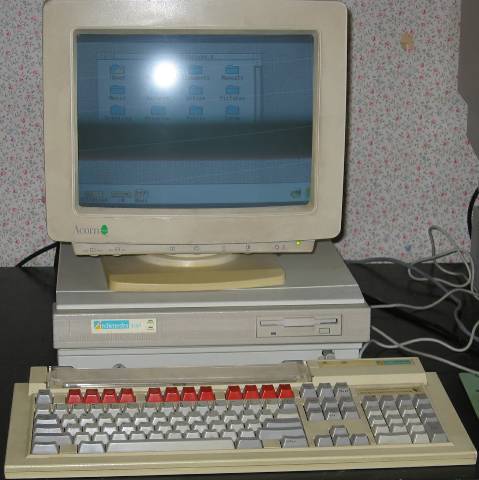 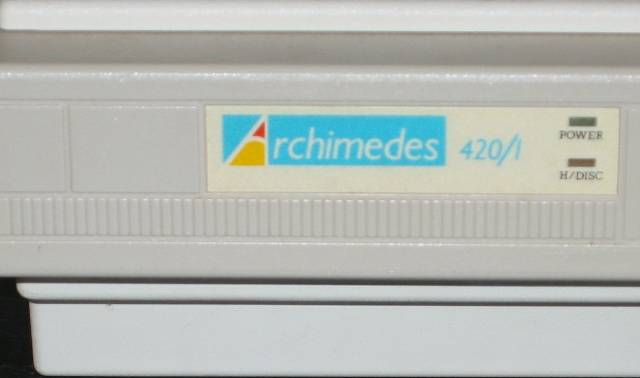 The Archimedes A420/1 logo on the front of the computer. But it does not match the Serial number on the base...

The back of the A420/1 showing the Atomwide Ethernet III podule in the top left. The VTi SCSI/User port podule is next to it in the top center. The Pineapple Digitiser is in the middle below the 2 previous podules. At the bottom are the A420/1 ports - 75Ohm Hi-Res Monitor (2 x BNC), Analogue RGB, Serial, Headphones and Parallel Printer. The Econet Interface is not fitted. The power supply and On/Off switch are on the right. 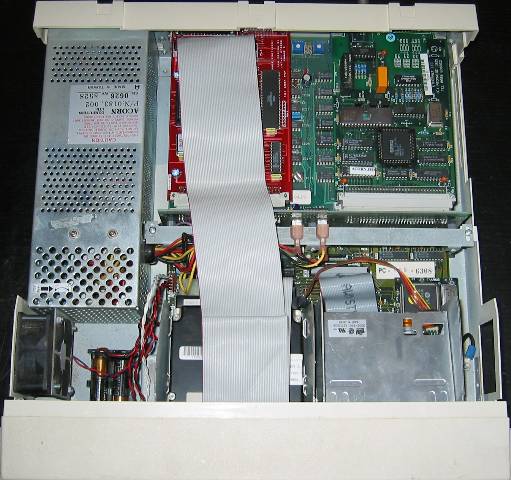 This shows the power supply on the right with the fan and batteries for the CMOS RAM in fornt of it. The red VTi SCSI/User port podule in the middle connected, by the ribbon cable to the SCS Drive. The Atomwide Ethernet II podule in hte top right with the floppy drive below it. 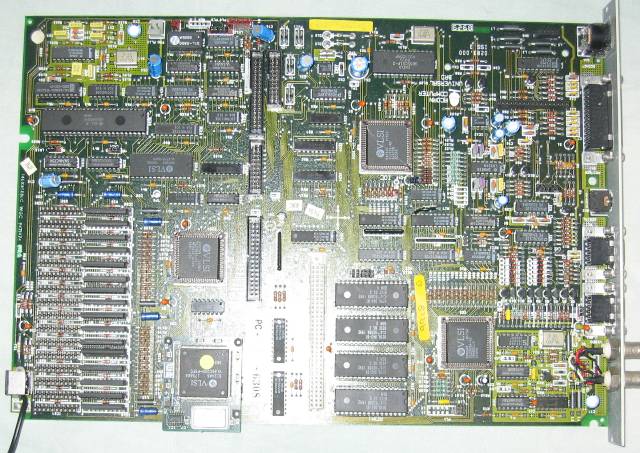 The second A420/1 is the AKB44, which is an A440/1, but the label on the front says A420/1! Since I had to get a new motherboard (curtesy of IFEL) and added the Aleph1 30MHz ARM3 from elsewhere, I suspect it is more an A4x0/1 than anything else. It is also a very basic system with no podules and no hard drive. 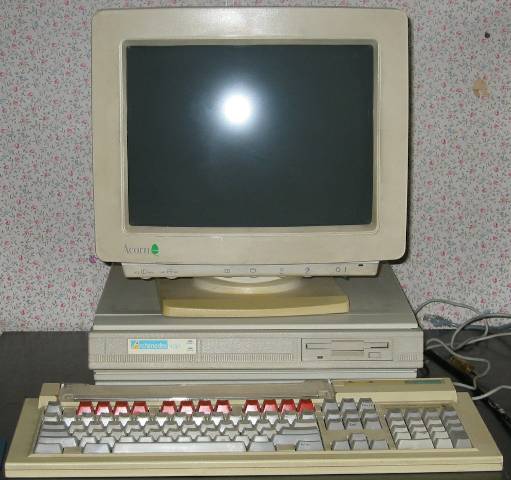 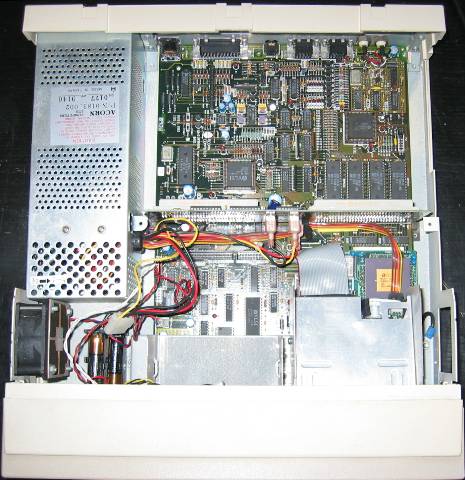 The A420/1 with the top removed, showing the floppy drive on the bottom right with the gold label of the Aleph1 30MHz ARM3 CPU above it. There is no hard drive fitted.

I bought this A440/1 in 2006. It is also a bit of an anomaly because although it says A440/1 on the front (see pictures below, the serial number on the bottom gives the product code ad AKB40 which is an A410/1! However the Computer has 4MB RAM and a 20MB Seagate ST125 MFM hard disc. It had one owner from new and was supplied by Watford Electronics. I think that Watford Electronics must have taken an A410/1 and upgraded it to the A440/1 specification. It has subsequently been upgraded to RISC OS 3.10 but still has its ARM2. The ST125 hard disc no longer works, an Oak Solutions Worra Winne 80MB hard disc and Oak SCSI card have been added to replace it. 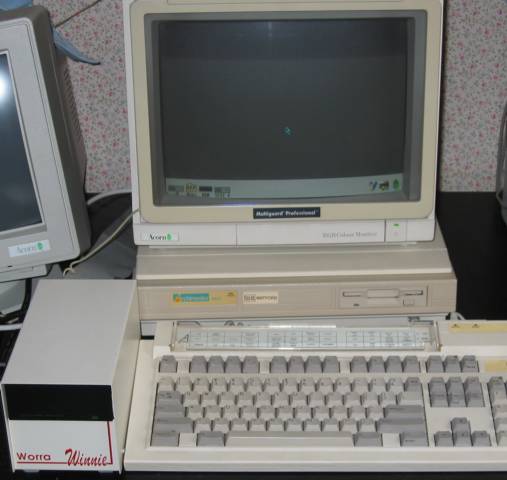 Acorn A440/1 with Oak solutions Worra Winnie 80MB SCSI hard disc and an AKF12 monitor . The stickers on the system box and the monitor show that it was originally supplied by Watford Electronics. There is a Multiguard Professional anti-glare screen on the monitor.

The Archimedes label says Archimedes A440/1, unfortunately it conflicts with the AKB40 product code in the serial number! 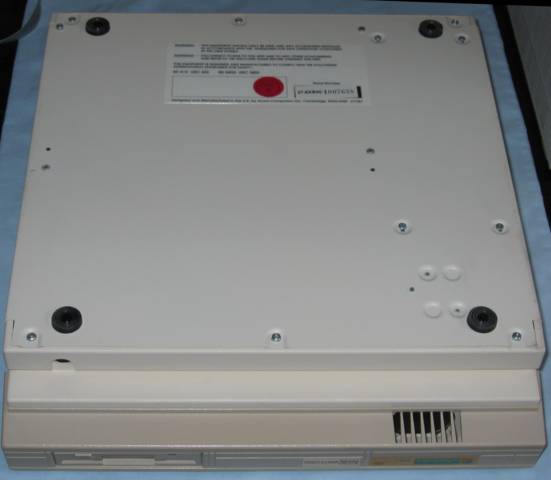 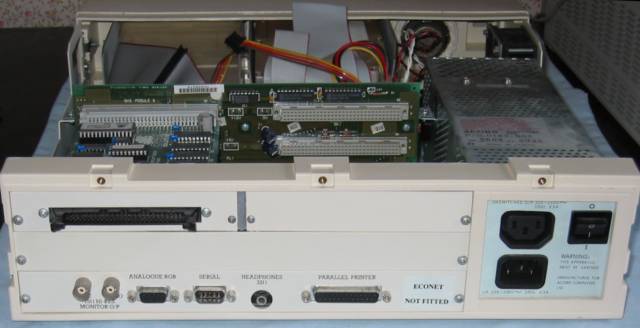 The back of the A440/1 showing, from left to right and top downwards: the Oak Solutions SCSI podule and connector, Power In & Out and On/Off switch, 75Ohm Hi-Res Monitor (2 x BNC), Analogue RGB, Serial, Headphones and Parallel Printer. The Econet Interface is not fitted. Over the top you can see the podule backplane. 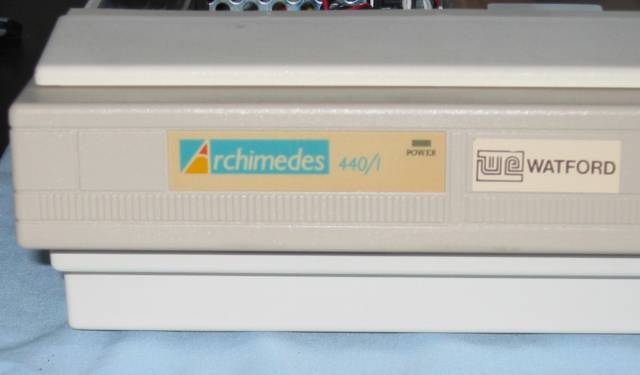 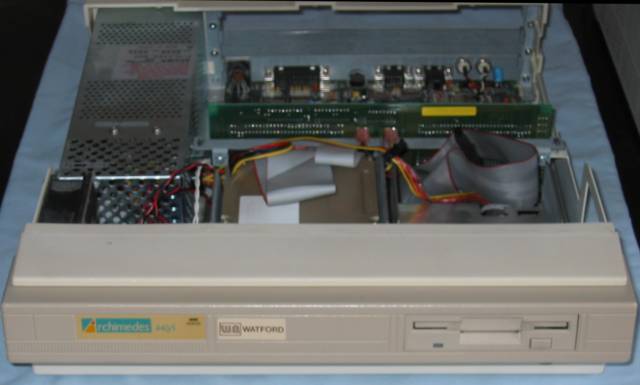 The A440/1 with the top removed showing the floppy and hard disc at the front, with the top of the backplane behind and the power supply on the left. 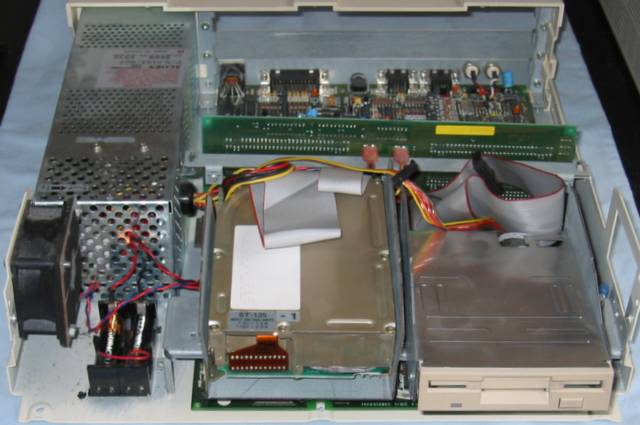 The Acorn A440/1 with the front removed, showing from left to right and front to back: the cooling fan, the batteries for the CMOS RAM, the Seagate ST-125 MFM hard disc, the floppy disc drive, the power supply (behind the cooling fan), the backplane (behind the disc drives and the poorts at the back of the case. 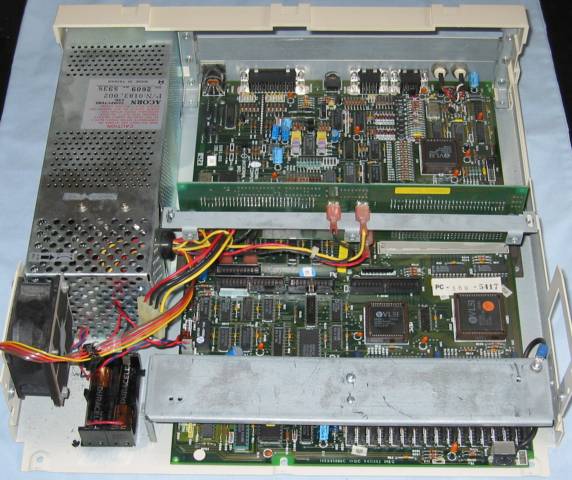 Acorn A440/1 with discs removed

The Acorn A440/1 with the hard disc and floppy disc drive removed, showing: the RAM under the disc bridge, the keyboard socket in the front right, the ARM2 CPU, behind the disc bridge, with the orange spot on it, the MEMC1a to the left of the CPU.

The Acorn A440/1 without the backplane looking along the motherboard. The point to notice is that some of the RAM chips are socketed, which suggests they have been installed as part of an upgrade. 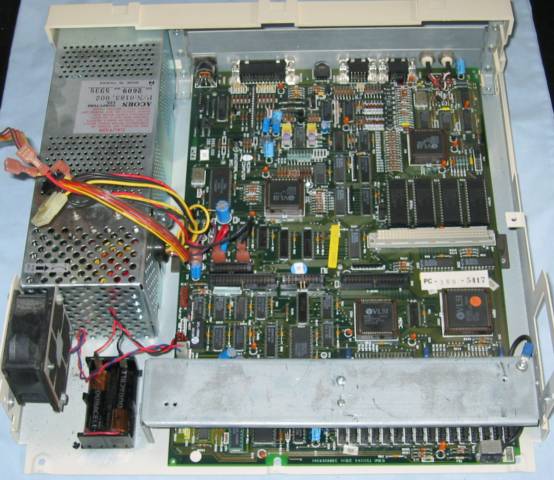 The Acorn A440/1 motherboard. A Hi-Res version of this picture is available HERE  .