In April 1994 Acorn launched the Risc PC 600 (sse the press release Acorn Computers Launches the Risc PC Range), their first major hardware change since the launch of the A540 and the ARM3 CPU in 1990. The Risc PC 600 had a 30MHz ARM610 CPU and a new version of RISC OS (3.50) to support the new hardware (See the technical overview). The support chips, VIDC, MEMC and IOC ,were upgraded to the VIDC20 and IOMD. maximum memory was increased from 16MB on the A540 (with an MEMC for every 4 MB) to a maximum 256MB using DRAM SIMMs and optionally 1 or 2 MB of video memory (VRAM) could be installed. The Risc PC 600, for the first time, used a standard PC AT keyboard, but kept the proprietary Acorn 3 button mouse. Sound support was 8 channel, 8 bit. The basic Risc PC could support 2 podule cards and had a separate network interface for either Econet or Ethernet.

Here is an Acorn publicity photograph of the Risc PC 600: 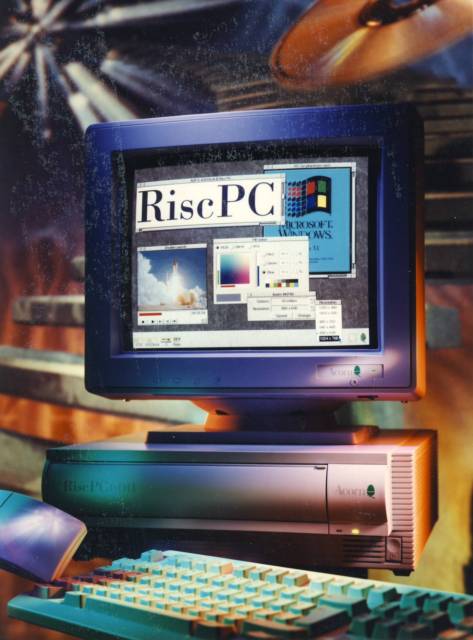 And the following Risc PCs aimed at the Unix X Window terminal market:

Other manuals are available under Risc PC Computers .

I bought my Risc PC 600 (an ACB25) in October 1994, it replaced my A410/1. I was using it regularly up to 2002 when I bought an Iyonix, but still keep it running (it has a BJC7100 attached with Photoreal driver). Over the years it got regularly upgraded. The current specification is given below but some of the upgrades were: 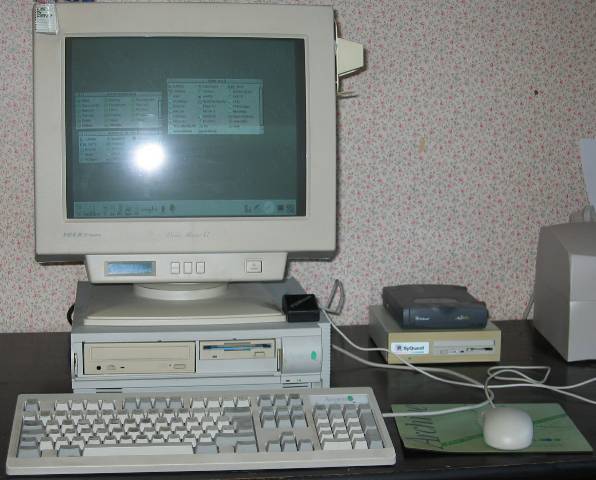 My Risc PC 600 running RISC OS 4.39 Adjust. On top is my faithful Ilyama VisionMaster 17" monitor. To the right are 2 SyQuest removable drives, on top is an EZflyer 230MB and below is a 280MB SyQuest. On top of the case at the right is an ST Developments PS2 mouse converter. In front of the SyQuest drives is an Archive mousemat and Microsoft PS/2 Intellimouse. Originally an ACB25 it has been seriously updated.

The front view of my Risc PC 600, like many Risc PCs the spring holding the flap up has long sice broken which explains why it is sagging to the left. You can clearly see the Risc PC 600 on the panel. The power on/off switch is bottom Right underneath the Acorn logo.

The rear view of my Risc PC 600 with the power supply on the left. On the top next to the power supply is the Cumana 16/32bit SCSI II podule with external connector, which has now been replaced by a castle SCSI II card, and a blanking plate over the other unused podule slot. On the right top is the serial number underneath the bar code, with the ACB25 product code in the middle. Along the bottom are the ports, from left to right, Reset button, audio, video, keyboard, mouse, Network RJ45, parallel & serial. The Irlam Instruments Risc TV card was installed after this picture was taken. 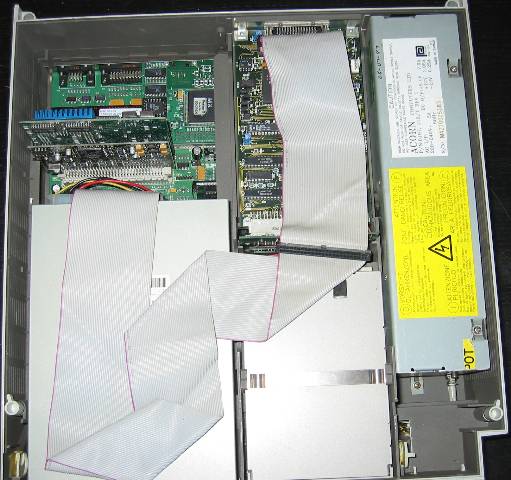 Risc PC 600 with the top cover off

My Risc PC 600 with the top cover removed, On the right is the power supply. At the front, next to the power supply is the floppy disc, with the CDROM next to it. The CDROM is a SCSI drive and is connected to the Castle SCSI II podule by the long ribbon cable. Above the CDROM drive are the two CPU cards. In front is the StrongARM card and the PCcard is behind it (you can just see the blue heat sink). Both cards have now been replace by the APDL Turbo StrongARM and the CJE 586 PC Card. 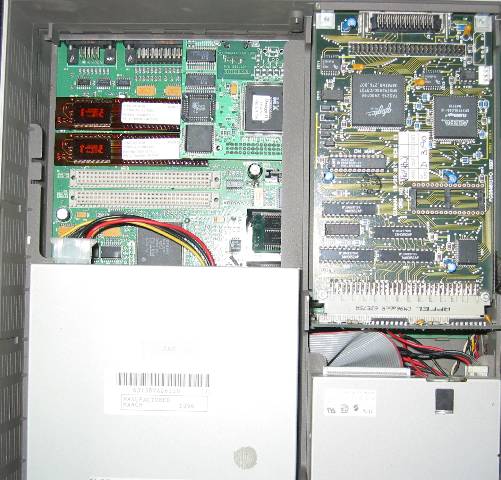 My Risc PC 600 with the CPU cards removed. In the top left you can see the RISC OS 4.39 Adjust ROMs with the white labels. To the right is the i-cubed EtherLAN 600 Network Interface. With the SCSI ribbon cable removed, you can also see the Cumana 16/32 bit SCSI II podule, which had now been replace by a Castle SCSI II card, plugged into the 2 socket backplane. 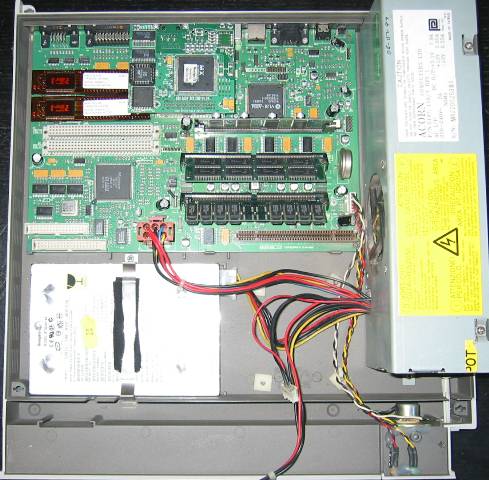 My Risc PC 600 with the first slice, including the CDROM and floppy drive removed, to show the motherboard. At the bottom left is the 20GB Hard Disc. Above that hard disc is the on board IDE and floppy connectors. Going up the left hand side of the motherboard, there are the 2 CPU sockets with the RISC OS 4.39 (Adjust) ROMs. In the middle at the top is an i-cubed EtherLAN 600 network card. Below the Network Card and to the right is the 2MB VRAM with an 8MB SIMM and a 64MB DIMM below it. At the bottom on the right is the backplane socket.

My second Risc PC 600 was bought on Ebay in 2005. It is a close to the original Risc PC 600 specification with a 30MHz ARM 610 CPU card, it still runs RISC OS 3.5, but has had its memory upgraded from 4 to 32MB with 2 x Kingston 16MB EDO RAM SIMMs. It still has a 210MB hard disc and an Acorn1MB VRAM. It has an Acorn Risc PC 2 slot backplane, but no podules installed. I have installed an Acorn AEH78 Ethernet network card so it can be connected to my LAN, In addition it has had the Acorn ACD05 Risc PC16 bit sound upgrade installed and an Acorn ACA42 486 PC Card. which is configured with a 20MB hard disc and runs Novell DRDOS. 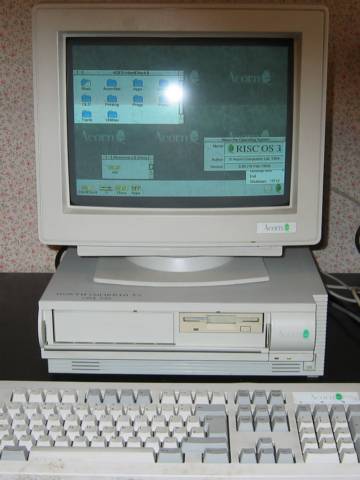 Like many Risc PCs this one was used in education and has the college name as a security mark. I don't try and remove them as they are cosmetic only and don't affect the computer, besides they are part of the computer's history.

Like many Risc PCs, the spring to hold up the front flap has gone AWOL, with one of the hooks for it is broken off. This Risc PC does not have a CDROM drive. I am not sure if the floppy drive is original, I think it is, but it has discoloured noticably.

Back of the Risc PC 600 showing from left to right: the power sockets and the blanking plates for any podule expansion. Below the blanking plates are the reset switch, headphone, VGA Monitor, keyboard, mouse, 10Base2 and 10BaseT , parallel and serial interfaces. 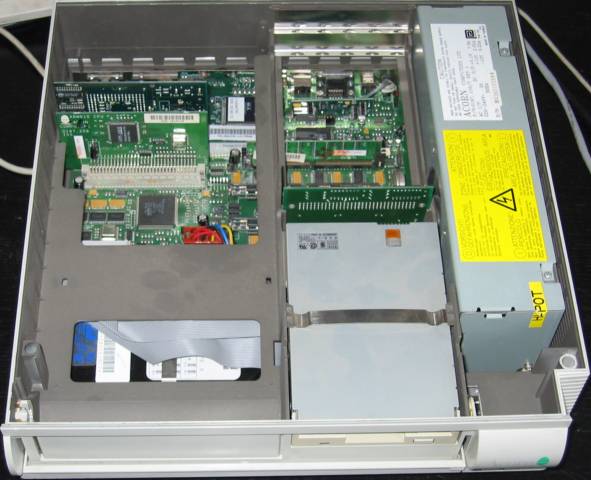 With the top cover removed, the inside of the Risc PC 600 is visible. In the left front, partially hidden by the case is the Conner hard disc. At the back on the left are the two CPU cards, mounted vertically, the front one is the ARM610 and the ACA42 486 PC card is behind. Just visible at the right in the back is the small ACD02 16 bit sound card. 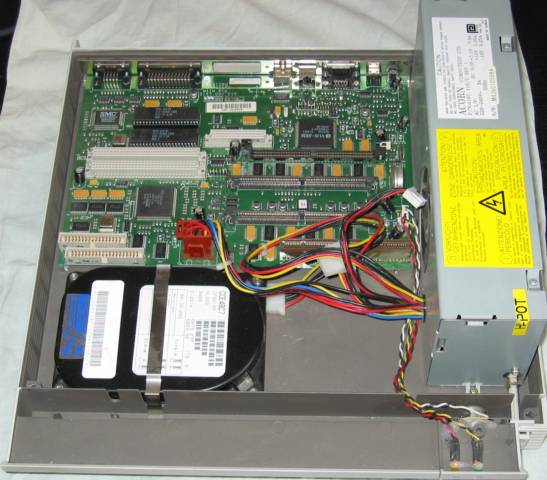 With the case removed, the Risc PC motherboard can be seen. At the bottom left is the Conner 210MB hard disc and, on the motherboard, the IDE socket, with the floppy socket above. The 2 connectors, halfway up the left are for the CPU cards and the RISC OS 3.50 ROMs are behind them. Next to the ROMs in the middle is the socket for a network card. On the right, below the square IC is the socket for the VRAM and below it the sockets for the RAM.